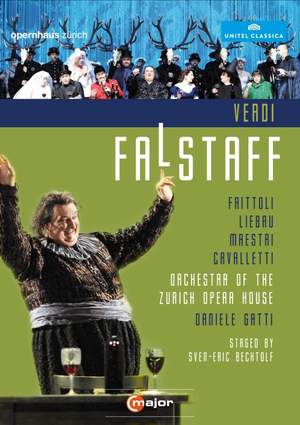 the conductor starts apparently quite steadily. But this lack of a certain flick and bounce is compensated for by the focus of Daniele Gatti...places on Verdi's radically forward-looking orchestration...The... — Gramophone Magazine, October 2012 More…

Daniele Gatti, currently Music Director of the Orchestre National de France and Zurich Opera will conduct Verdi’s Falstaff at the Royal Opera House in May with Ambrogio Maestri in the leading rôle.

Features a great cast: Ambrogio Maestri is one of the finest Falstaffs of our time. The Italian baritone brings a powerful, versatile voice to his role, but also brings his character a hilarious buffo quality. Daniele Gatti, one of the most acclaimed opera conductors working today, leads a stunning cast of singers including Barbara Fritolli as Alice Ford.

Genuinely warm italianita in all of the music-making, combined with a boisterous production by stage director Sven-Eric Bechtolf, turns Verdi’s commedia lirica into a fireworks display of high spirits as well as what the Neue Zürcher Zeitung called “musically and dramaturgically a feast of life and of love of life.”

the conductor starts apparently quite steadily. But this lack of a certain flick and bounce is compensated for by the focus of Daniele Gatti...places on Verdi's radically forward-looking orchestration...The cast, led by a secure Maestri, can boast a lovable Nannetta in Liebau and further clever variations on Quickly's eccentricity from Naef.

As usual in a good Falstaff, the heroes are the conductor and the protagonist. Daniele Gatti never lets pacing drag, he's alive to every nuance onstage...and the bounciness of his reading is never too heavily or obviously applied...Maestri's voice ideally suits the role - an attractively timbred, well-focused, wide-ranging baritone, with sufficient power and variety of colour. He works the text in detail, frequently risking a genuinely intimate delivery.