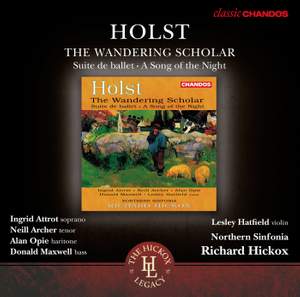 When boughs are green in April (Louis, Alison)

Before that I was twenty (Pierre, Father Philippe, Alison)

He'll lie all day in the sun (Louis, Pierre, Alison)

As I was walking here to-day (Pierre, Louis, Alison)

This re-release of the Suite de Ballet, A Song of the Night, and The Wandering Scholar by Gustav Holst forms part of the new Hickox Legacy commemorative series on Chandos Records, leading up to (and continuing beyond) the fifth anniversary, in Nov 2013, of the conductor's untimely death. The recording is released on the Classic Chandos label at Mid Price.

Both the Suite de Ballet (1899) and A Song of the Night (1903) are early works. The Suite de Ballet is light music, expertly written and colourfully scored. It brings to mind the works of Edward German and Sir Arthur Sullivan, but also glances in the direction of French composers, at Chabrier in ‘Danse rustique’ and Saint-Saëns in ‘Scène de nuit’. In A Song of the Night Holst demonstrates confident and imaginative writing for solo violin. He left no clues as to the specific meaning of the song, but at the time of writing he was deeply immersed in learning Sanskrit, and his enthusiasm for Indian mythology may well have inspired the work.

Through her collection Mediaeval Latin Lyrics and her book The Wandering Scholars, Helen Waddell (1889 – 1965) exercised considerable influence on British music in the 1930s, and her translations have been set to music by many composers, Holst being one of them. The Wandering Scholar (1929 – 30) is a one-act comic chamber opera featuring just four characters, and no chorus. Holst uses modest orchestral forces; there are no big numbers, no set-pieces, and no overture. It is a simple rural tale, told simply, with original music that suggests (but is not actual) folk music. The premiere performance took place in 1934, but Holst was too ill to attend, and died soon after, before he had the chance to review any of the details over which he had felt uncertain as he was composing the work. In 1968, his daughter Imogen Holst and her friend Benjamin Britten edited the score in order to address some of Holst's earlier concerns.

BBC Music Magazine wrote of the disc: ‘Holst’s Chaucer-like farce [The Wandering Scholar] comes up freshly minted in this lively recording… the couplings reveal Holst in light-music and Romantic modes, respectively, and throughout Hickox inspires some full-blooded music-making.’