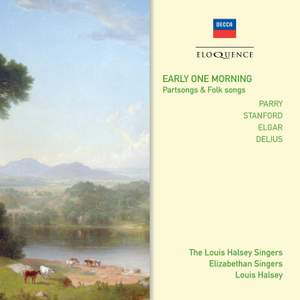 Halsey has helped to set a new standard in such choral singing, one of the splendid bonuses of the King's tradition, from which Halsey stems. Recording first-rate as one would expect from Argo — Gramophone Magazine More…

1. My Soul, there is a country

2. I know my Soul hath Power

4. There is an old Belief

5. At the round Earth's imagined Corners

Stanford: Sweet love for me

Stanford: My love's an arbutus

Stanford: Shall we go dance

Elgar: As torrents in summer

trad.: I sowed the seeds of love

trad.: Dance to your Daddy

trad.: I love my Love

trad.: The Sailor and Young Nancy

trad.: Our Captain calls all hands

trad.: Down among the dead men

During the 1960s, Louis Halsey, together with the Elizabethan Singers and The Louis Halsey Singers made a number of recordings of British choral music for Decca. Three LPs devoted to the music of Parry, Elgar, Stanford and Delius and of folk song settings by a range of British composers, are here collected on this 2CD set, all of this material released on CD for the first time. Though his magnificent choral piece Jerusalem eclipses much of his other work, the beautiful Songs of Farewell, written during the last three years of his life must be counted among the masterpieces of English choral music. Diana McVeagh describes the Elgar choral songs as ‘elaborate, expansive, and gorgeous as sheer sound’ and so they are in these wonderful performances. All but one of Delius’s partsongs were recorded for the original LP and the disc of folk songs arranged by Tippett, Williamson, Grainger, Vaughan Williams, Holst and other front-rank British composers is charming and amusing. Original LP notes (including a very persuasive one by Louis Halsey himself) are reprinted in the booklet.

Halsey has helped to set a new standard in such choral singing, one of the splendid bonuses of the King's tradition, from which Halsey stems. Recording first-rate as one would expect from Argo