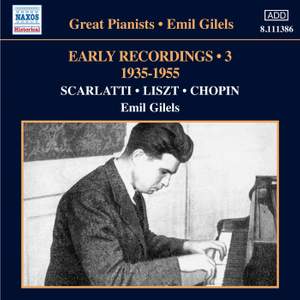 Outstanding early Gilels, with some superb Liszt including his legendary Figaro Fantasy from 1935. The Scarlatti Sonatas may not stand the test of time so well, but this is a must. — BBC Music Magazine, Christmas 2012, 5 out of 5 stars More…

Liszt: Fantasy on Themes from Mozart's Marriage of Figaro and Don Giovanni, S697

Emil Gilels played a sonata by Scarlatti at his first public concert in 1929 and included them in his tours to the West in the 1950s. These recordings present a splendid group of the composer’s widely contrasting moods. Gilels was a true virtuoso in the Lisztian tradition, combining musical integrity with rarely equalled technique. The Fantasia was one of the works with which he won the First Soviet All-Union Competition in 1933, while his recordings of the Hungarian Rhapsodies and three works by Chopin are full of character and personality. A recently discovered notebook in which Gilels logged some of his recording sessions has made the dating of these recordings more accurate in this edition.

Outstanding early Gilels, with some superb Liszt including his legendary Figaro Fantasy from 1935. The Scarlatti Sonatas may not stand the test of time so well, but this is a must.

Few pianists have possessed a more comprehensive, magisterial technique or musical integrity than Emil Gilels...And here, in Naxos's third volume, you will at once hear those salient characteristics that prompted awe and envy among Gilels's finest colleagues...[His Liszt] is overwhelming in its pulverising strength and brilliance.