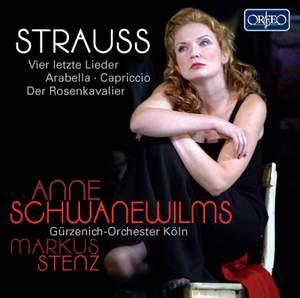 There’s some wonderful singing [in the Capriccio extract]...She’s also excellent as Arabella. At the start of the solo her singing is touching and with a hint of vulnerability to it. Later...she... — MusicWeb International, August 2012 More…

Elektra from Valery Gergiev and the London Symphony Orchestra, Die Frau ohne Schatten from the 2011 Salzburg Festival, and the Four Last Songs from Anne Schwanewilms.

A setting of poems by Hermann Hesse and Joseph von Eichendorff, Richard Strauss’s 'Four Last Songs' afford ultimate proof of Strauss’s unique ability to write soaring melodic lines for the soprano voice. Many outstanding Strauss sopranos have faced up to the challenge and now Anne Schwanewilms joins them, ahead of her Proms performance on 17th July.

She is one of the most sought-after Strauss sopranos of our day; a regular visitor to all the world’s leading opera houses and festivals, from Salzburg Festival and the Royal Opera, Covent Garden, to the Bavarian, Dresden and Vienna State Operas. She has also been heard in many of Strauss’ works at the Cologne Opera, most recently at a recital in 2011, when she was joined by the Gürzenich Orchestra under Cologne’s general music director, Markus Stenz, which included excerpts from roles with which she is most closely associated. The valedictory tone of the songs contrasts with that of the final scene from 'Arabella,' in which Schwanewilms strikes just the right balance between the simplicity of the opening and the increasingly jubilant note on which the opera ends. In the final scene from 'Capriccio', this last-named quality is combined with the singer’s ability to achieve the parlando style ideally demanded by Strauss. In the 'Rosenkavalier' trio her emotionally-charged singing captures the Marschallin’s rejection in favour of a younger woman with an immediacy that is altogether overwhelming.

There’s some wonderful singing [in the Capriccio extract]...She’s also excellent as Arabella. At the start of the solo her singing is touching and with a hint of vulnerability to it. Later...she becomes more impassioned, as the music and the sentiments of the text demand...the Gürzenich-Orchester is inspired by Markus Stenz to some gorgeous playing.

Schwanewilms’s relatively steely sound may strike your ear as somewhat unusual, and I must admit it took me a while to ‘retune’ to her timbre, but once I had done so I really warmed to her approach. The orchestral support from Markus Stenz and the Gürzenich-Orchester Köln is pleasingly sensitive, keeping out of the way when necessary, but also coming to the fore at appropriate moments.

Schwanewilms is arguably the finest native German interpreter of Strauss’s more lyrical operatic roles, yet despite a soprano of considerable loveliness, she can sound disengaged, particularly from the words. Here, she gives a good account of herself, especially in the closing monologues of Arabella and Countess Madeleine

she soars through them all, pearl-like, backed by the succulent purr of Cologne’s Gürzenich Orchestra, conducted by Markus Stenz.