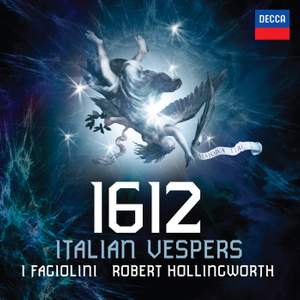 As we might expect from this group, the best performances come in those pieces requiring spacious grandeur and a generalised awesome sound - the works by Viadana particularly benefit here...There's... — BBC Music Magazine, August 2012, 4 out of 5 stars More…

anon.: Versicle & Response And Collect Of The Feast

A new Venetian Coronation from Paul McCreesh and the Gabrieli Consort, and a reconstruction of a typical Italian Vespers programme from circa 1612 from Robert Hollingworth and I Fagiolini.

Following their recording of Striggio’s Mass in 40 Parts from 1566, which racked up an astounding array of critical and commercial plaudits, Robert Hollingworth leads his maverick ensemble I Fagiolini on a new journey unearthing incredible lost works from the late Renaissance and early Baroque: 1612. The recording recreates a thanksgiving Vesper in commemoration of the famous Venetian naval victory at Lepanto in 1571, celebrated for over 200 years after the event in a new festival – The Feast of the Holy Rosary.

The title 1612 represents a year of momentous events: the death of the master of the ‘Massive Baroque’ and most brilliant of Venetian multi-choir composers, Giovanni Gabrieli; and thereby the apex of the fashion of multi-choirs. 1612 also marks the publication of Viadana’s collection of 4-choir Vesper Psalms, with a layout considerably more forward-looking than Monteverdi’s psalms in his 1610 publication. 1612 presents the world premiere recordings of Viadana’s Vesper Psalms and Gabrieli’s 28-voice Magnificat, surrounded by lost treasures from the glorious period of multi-choir music.

As we might expect from this group, the best performances come in those pieces requiring spacious grandeur and a generalised awesome sound - the works by Viadana particularly benefit here...There's fine soprano singing in Laetatus sum by Viadana, and a lovely cornett instrumental introduction to Barbarino's Exaudi Deus.

Hollingworth's sincere attention to detail is a much-needed breath of fresh air...[his] impeccable delivery of extra-special crunch moments provides plenty of points to knock your socks off...one can only relish I Fagiolini's gutsy soloists - none more so than the thrilling dialogue between high tenor Nicholas Mulroy and bass Greg Skidmore

First-rate scholarship from Keyte, a welcome return of the 'liturgical recreation' and a wonderfully uplifting and educational experience all round.

Hollingsworth seems inspired by the spirit of Tchaikovsky’s 1812, with his introduction of tolling bells, trumpet fanfares and cannon fire into the Magnificat, but it all sounds appropriate to the period when Monteverdi and his contemporaries brought a new sense of the spectacular to Italian religious music. A triumph!

The sound is sumptuous, the performances by I Fagiolini...utterly magnificent...the highlight is Hugh Keyte's reconstruction of Giovanni Gabrieli's electrifying 28-part Magnificat, complete with bells and fanfares, and his In ecclesiis, a sonic spectacular.

Plainsong antiphons, psalms by Gabrieli’s contemporary Lodovico Viadana, together with pieces by Monteverdi and others contribute to the textural variety of these Vespers, sung and played with I Fagiolini’s typical vitality, freshness and immediacy.

Once summoned to prayer, I stayed on my knees happily for almost 80 minutes, fully absorbed in the latest baroque blockbuster from Robert Hollingworth’s ensemble I Fagiolini...Everywhere on this exciting disc we find bold voices atmospherically recorded, standing tall in towering blocks of sound or curling in polyphonic raptures

Among the most memorable musical events of last season was the New York Philharmonic’s performance of 20th-century spatial music in the Park Avenue Armory. With its recording of Italian vespers from 1612, the maverick English early-music ensemble I Fagiolini brings to life an earlier period of architectural music that reached its apogee 400 years ago