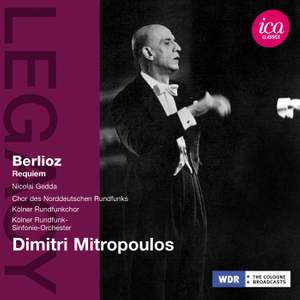 The Greek-born Dimitri Mitropoulos (1896–1960) was incredibly gifted – his photographic memory allowed him to conduct without a score in concert and also in rehearsal! After studies in Athens, Brussels and Berlin, he took various posts in Greece. In 1930, Mitropoulos played the solo part in Prokofiev’s Piano Concerto No.3 with the Berlin Philharmonic and conducted the work from the keyboard, becoming the first modern musician to do so. He made his US debut in 1936 and went on to become principal conductor of the Minneapolis Symphony Orchestra (1937–1949) and then music director of the New York Philharmonic (1951–1957), where he was eventually succeeded by Leonard Bernstein. He expanded the repertoire of the NYPO and championed Mahler’s symphonies in particular. Mitropoulos was also a major figure at New York’s Metropolitan Opera House and became its principal conductor in 1954. He died in Milan aged 64 rehearsing Mahler’s Symphony No.3.

In the mid-1950s, Mitropoulos frequently visited Cologne to perform with the Kölner Rundfunk-Sinfonie-Orchester, whose broadcasts have been well documented by ICA Classics. Releases include Mitropoulos’s last ever performance: a compelling account of Mahler’s Symphony No.3 (ICAC5021) which was awarded the prestigious Toblacher Komponierhäuschen International Record Prize in 2011.

Mitropoulos conducted Berlioz’s massive Requiem with its chorus of over 200 voices and offstage brass at the Salzburg Festival on 15 August 1956. This Cologne performance followed on 26 August 1956.

This ICA release is the first official recording using the original WDR master tapes. The sound from the 1956 tapes is incredible by any standards.

The tenor soloist in the Sanctus is the young Nicolai Gedda.

The performance is contained on one CD running for over 82 minutes.

There is some slight cause for alarm at the beginning, with a ragged entry from the sopranos. But the choir soon settles down and by the time he reaches the 'Dies irae', Dimitri Mitropoulos has really got into his stride...The hushed ending of the Agnus Dei sets the seal on a remarkable performance.

our first encounter with the combined Cologne choirs isn’t ideal [but] I must encourage you to persevere because the performance soon settles and the singers make a pretty good job of Berlioz’s demanding writing...Mitropoulos has the measure of this vast score and is able to convey its gaunt majesty, its beauty and its grandeur.