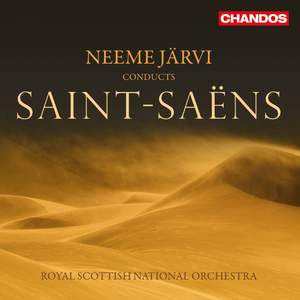 This is pure pleasure...a collection of sparkling gems...The RSNO is on top form, with shimmering strings, colourful woodwind and swaggering brass, full of wit, colour and joie de vivre. The... — BBC Music Magazine, August 2012, 5 out of 5 stars More…

The works on this disc are all early, dating from the first half of the composing life of Saint-Saëns – that is, with the one exception of the Marche du couronnement which the composer wrote for the coronation of Edward VII in 1902.

In Spartacus, the composer depicts Alphonse Pagès’s tragedy on the revolt headed by the ill-fated gladiator in 73 BC by use of bold, chromatic notes, followed by a military allegro which integrates them. After a tender theme, the bold notes return, now with a downward turn at the end, probably evoking Spartacus’s defeat, and the concert overture ends with a march that recalls the tender theme.

Equally dramatic is Saint-Saëns’s symphonic poem Phaëton. In ancient Greek myths, Phaëton, the son of Helios, is reluctantly given permission to drive his father’s sun chariot. As Phaëton fails to control the chariot, and carries the sun too close to the earth, Zeus intervenes and brings the unfortunate ride – and Phaëton himself – to an abrupt end by means of a thunderbolt. Saint-Saëns’s writing for large-scale orchestra (including contra-bassoon, tuba, two harps, and three timpanists) brings with it a pure, raw energy. The intense state of panic is signalled by a menacing low note on the trombone and further heightened through subsequent imitative entries that crowd in on one another. After Zeus’s massive thunderbolt, the music subsides into a feeling of loss and regret. Saint-Saëns’s other three symphonic poems are also on this disc – Le Rouet d’Omphale, Danse macabre, and La Jeunesse d’Hercule – as well as the ‘Danse bacchanale’ from Samson et Dalila and the ‘Marche militaire française’ from Suite algérienne.

The works are performed by the Royal Scottish National Orchestra and its Conductor Laureate, Neeme Järvi, who in the course of his conducting career has amassed a distinguished discography of more than 440 recordings, well over 150 of them for Chandos Records. Järvi is celebrating his seventy-fifth birthday this year, and to mark the anniversary we will release a two-disc set of highlights from his extensive Chandos discography in July.

This is pure pleasure...a collection of sparkling gems...The RSNO is on top form, with shimmering strings, colourful woodwind and swaggering brass, full of wit, colour and joie de vivre. The recording is also outstanding...giving a wonderful, natural bloom that is perfect for this effervescent music.

The playing is full of character, the music's detail clearly elucidated, the images of Saint-Saens's imagination firmly and atmospherically fixed...All in all this is a disc with plenty to discover and enjoy.

Järvi's programme of symphonic poems, bacchanales and barcarolles ranges from the smokily luxuriant to the swashbuckling. An attractive performance of exotic bon-bons from the RSNO.

You can’t imagine these pieces being delivered with more conviction; proof that the relationship between Järvi and the RSNO is as strong as ever.