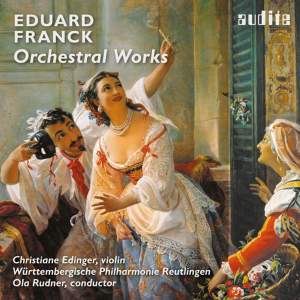 Continuing the recording series of instrumental music by Eduard Franck which already includes his Violin Concertos Op. 30 and Op. 57, and also his Symphonies Op. 42 and Op. 47, Audite now presents Franck’s orchestral works. Once again, we hear music of the highest technical quality as well as a characteristic idiom. All were written during the 1840s when Franck set out on his career as a composer, attracting the interest of the music critics who from this time onwards were increasingly to infl uence musical history. The works recorded here reveal an attractive amalgamation of classicist and progressive trends, referring on the one hand to Schumann and Brahms, and on the other to Wagner and Liszt. They more than hold their own as original contributions to 19th century instrumental music.

No relation to Cesare, Eduard Franck's (1817-93) music has echoes of Mendelssohn, Berlioz and Schumann. Pleasant, well-crafted but hardly earth-shattering, in lively recorded premieres.

a series of distinguished and authoritative new recordings ... which continues to gain in stature and significance with each successive issue. Performances and engineering are of high caliber … this is an impressive offering, fully up to the standards that we have grown to expect from this label.