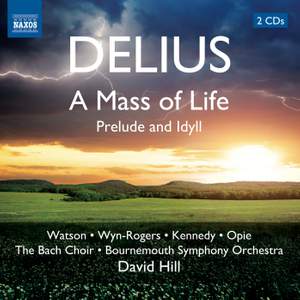 Delius: A Mass of Life

Idyll: Once I passed through a populous city (Baritone, Soprano)

Long an admirer of Nietzsches poetry, Frederick Delius composed A Mass of Life while at the height of his powers, blending passages from Also Sprach Zarathustra into orchestral textures of great expressive depth and striking beauty. Written in his final years, the Prelude and Idyll sourced music from a long discarded opera, transforming a story of lust and vengeance into one which emphasizes the transience of life and love. David Hills previous BSO recordings include a perfectly judged Dies natalis by Gerald Finzi (The Guardian on 8570417), while his Vaughan Williams Sancta Civitas (8572424) was described as thrilling a great case for a neglected work (Classic FM).

David Hill's impressive new recording with his Bach Choir (in the original German) boasts confident, ardent choral singing and orchestral playing, and a string solo team - even if Alan Opie, representing the prophet Zarathustra, perhaps makes his points with too much Wagnerian declamation at the expense of line....But listeners tempted by Naxos's bargain price into exploring this work won't be disappointed.

Alan Opie, who has the lion's share of the solo music in the work, is almost Wotan-like in his performances...Andrew Kennedy, Catherine Wyn-Rogers and Janice Watson also offer fine lyrical interpretations of their solo parts...This is a must for any Delius Liebhaber and...a marvellous starting point for anyone new to Delius's unique but compelling art.

It's a tribute to David Hill and his musicians and technical team that this rolling wave of joy is exceptionally well caught.

Hill draws some magnificent playing from the Bournemouth Symphony Orchestra, and has a top-class quartet of soloists, most notably baritone Alan Opie (who has the lion’s share of the solo music in the work) who delivers a lyrical and radiant account. The chorus parts are notoriously hard but the members of the Bach Choir rise to the challenges superbly and help produce a really thrilling performance.

splendid modern sound, a thrilling choir and orchestra, and, in David Hill, a conductor no less devoted to Delius than his more celebrated predecessor [Beecham]. His soloists are outstanding: Janice Watson, Catherine Wyn-Rogers and Andrew Kennedy sing with clarity and radiance, but the star is Alan Opie, whose lyrical singing is wonderful.

The singing is suitably majestic for Nietzsche's vision of mankind's destiny...Hill draws some marvellously expressive playing from the BSO, with soloists – chief among them Alan Opie – in magnificent form.

Even if you already have those discs, the excellent line-up of vocal and orchestral forces in this new one is well worth investigating, the Bach Choir on fine form and the four soloists sounding thoroughly immersed in their roles...Hill maintains the inner momentum and points up the essential poetry of the piece.

Even I, congenitally allergic to Delius’s music and Nietzsche’s writing, can scarce forbear to cheer this stunning recording...it certainly celebrates life, especially in this thrilling performance by the Bach Choir, Bournemouth Symphony Orchestra and quality soloists