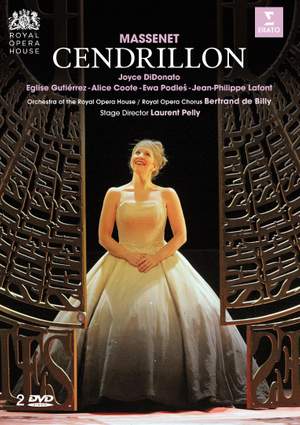 Pelly's production has a style all of its own...DiDonato is winning in Cinderella's smiles and tears, though vocally a little edgy. But she's well ballasted by...Alice Coote, who is intense and... — BBC Music Magazine, July 2012, 4 out of 5 stars More…

With Joyce DiDonato as Cinderella capturing all hearts – not just Prince Charming’s – Massenet’s enchanting, sophisticated retelling of the classic fairytale makes its debut at Covent Garden in a charming and witty production by Laurent Pelly.

The Cinderella story seen through the eyes of the belle époque, Massenet’s Cendrillon was first performed at the Opéra-Comique in Paris in 1899 and its gorgeous score embraces pathos, pastiche, broad humour, subtle eroticism and sheer magic.

Neglected for much of the 20th century, this entrancing and often surprising opera has found a firmer place in the repertoire over the past 30 years. In Summer 2011 its debut at London’s Royal Opera House was built around mezzo soprano Joyce DiDonato, who first took on the title role at the Santa Fe festival in 2006; there, as at Covent Garden, the staging was by French director Laurent Pelly, celebrated for his production of Donizetti’s La Fille du regiment with Natalie Dessay and Juan Diego Flórez (Virgin Classics DVD 5099951900298).

The décor is inspired by a venerable volume of Charles Perrault’s fairy tales bound in red morocco leather, and the dominant colours are white, black and crimson, though mauve is chosen for the body-hugging gown worn by the voluptuous, capricious Fairy Godmother of Eglise Gutierrez as she scales spellbinding coloratura heights.

Joyce DiDonato,“singing the title-role with all the gleaming tone, pellucid projection and smiling warmth for which she is justly celebrated” (Daily Telegraph), brings a touching simplicity and honesty to her portrayal of the downtrodden daughter. The New York Times found her performance “thoroughly enchanting. She won sympathy for the girl’s plight at once, and her exquisite articulation of the repeated phrase “Vous êtes mon Prince Charmant” in the first love duet — surely the opera’s most ravishing moments — was flawless.” Her Prince, whose fin de siècle world-weariness evaporates when he meets his true love, is sung en travesti by another mezzo, Alice Coote, described by the Financial Times as “the most perfectly elegant Prince Charming ... she sings with glorious fullness and confidence”.

The only principal role sung by a man is Cendrillon’s good-hearted, but ineffectual father, Pandolfe, portrayed here by bass-baritone Jean-Philippe Lafont, a mainstay of the opera scene in France, but here making his Covent Garden debut. His gentle character hardly stands a chance against his armour-plated wife, the formidable Madame de la Haltière, here embodied in flamboyant vocal and physical style by Polish contralto Ewa Podles: her cavernous lower notes shake the Royal Opera’s foundations, while her opulently padded derrière sweeps all before (and behind) it.

Pelly's production has a style all of its own...DiDonato is winning in Cinderella's smiles and tears, though vocally a little edgy. But she's well ballasted by...Alice Coote, who is intense and incandescent - the star of the performance. Also in a class of her own is Ewa Podles, as a suitably parodic stepmother.

the cast is a strong one. Joyce DiDonato brings star quality to the title-role...Alice Coote [is] in simply stunning form, pouring out a stream of molten mezzo ardour...Ewa Podles brings her ten-ton cannon of a contralto to bear as Madame de la Haltiere...de Billy's sparkling style makes him an ideal conductor for Massenet and he obtains first-rate orchestral playing.

Vocally, Coote and DiDonato have very different mezzo qualities so that they blend well in duet, while retaining their individual timbres...Bertrand de Billy leads a highly sympathetic reading of the score...revelling in the pomposity of the court dances while conjuring magic in the duets.

the strong colour of [DiDonato's] distinctive mezzo comes into its own in this role...her wide-eyed delight at her magical transformation is lovely to see and hear... The chorus are fully signed up to the tongue-in-cheek humour of the piece and de Billy conducts the orchestra with all the lightness of touch that the piece needs.