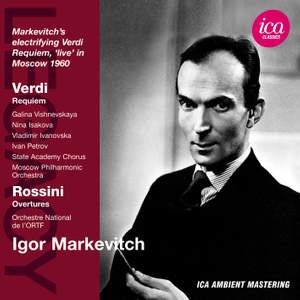 one of the great interpretations, intensely felt and marvellously acute in its understanding of the balance between the score's devotional and dramatic elements. The playing and choral singing... — The Guardian, 12th July 2012, More…

Libera me: Libera me, Domine

Libera me: Libera me, Domine

L'Italiana in Algeri (The Italian Girl in Algiers): Overture

The great Russian conductor Igor Markevitch (1912–1983) was born in Kiev and spent his formative years in Switzerland. He studied piano with Cortot and composition with Boulanger, and from the late 1920s until 1939 he enjoyed a successful career as a composer. However, after this period he concentrated on conducting, making a sensational debut with the Boston Symphony Orchestra in 1955. He recorded with all the major orchestras, notably the Berlin Philharmonic, Philharmonia, London Symphony Orchestra and Lamoureux, and guest conducted in all the main international centres until the mid-1970s. Markevitch left a very large discography on EMI, DG and Philips.

At the height of his powers in 1960, Markevitch returned to Russia and made a great impact with his concerts with the Moscow Philharmonic Orchestra, resulting in this vibrant live and rare recording of the Verdi Requiem which preceded the studio version (no longer available). The spontaneity of the live recording is very evident in terms of both the extremely wide dynamic range of the recording and Markevitch’s fiery conducting, which never lets up.

David Patmore has written, ‘Markevitch’s repertoire during this visit included the Verdi Requiem, then a most unusual work to encounter in Russia because of its overt religious purpose and meaning. Possibly as a result, Markevitch and his Russian forces held no inhibitions in their performance, emphasising the operatic quality of the work, and performing it more as a drama than a liturgical rite.’

The recording features a young Galina Vishnevskaya, in her prime as an outstanding dramatic soprano. The bass, Ivan Petrov (of German origin), was born in Irkutsk in 1920, becoming a stalwart of the Bolshoi company – he was considered to be one of their finest basses. The mezzo-soprano and tenor of Markevitch’s quartet, Nina Isakova and Vladimir Ivanovsky, did not achieve international fame, but their contributions on this occasion were certainly whole-hearted. Markevitch’s rapport with both chorus and orchestra was clearly close, with strong attack matched by great sensitivity from both.

The Rossini Overtures, all brilliantly played, have been sourced from a mint LP to give extra bloom to the sound.

The recording features the Ambient Mastering process to widen the sound stage and create more depth.

one of the great interpretations, intensely felt and marvellously acute in its understanding of the balance between the score's devotional and dramatic elements. The playing and choral singing are frighteningly committed...The filler, meanwhile, is a selection of Rossini overtures recorded in Paris in 1957, done with bags of energy and impeccable wit.