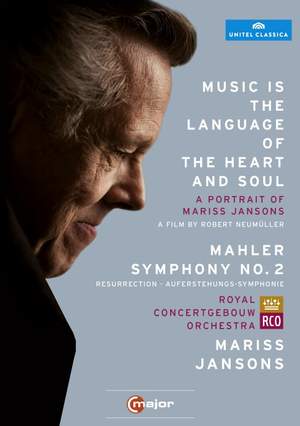 Offer, Music is the language of the heart and soul

A portrait of Mariss Jansons

Most valuable is the footage of his father, conductor Arvid Jansons, and of his own early days as a Herbert von Karajan protege...Of Jansons's humanity and penetrating gifts as a conductor we... — BBC Music Magazine, July 2012, 3 out of 5 stars More…

This is the only available documentary about Mariss Jansons from his early career until present day. Jansons himself relates the story of his youth and education, historical footage shows the young maestro with his mentor Herbert von Karajan and taking his first steps towards an international career.

Mariss Jansons is one of the leading conductors, performing with all the important orchestras in the world. Film maker Robert Neumüller observes Jansons in rehearsal for the New Year Concert with the Vienna Philharmonic, as well as working with the top orchestras he is currently heading, the Royal Concertgebouw and the Bavarian Radio Symphony Orchestra.

This 2 DVD-set includes a performance of Mahler Symphony No. 2 “Resurrection” with Mariss Jansons conducting the Concertgebouw Orchestra, one of the best orchestra’s in the world.

“Mariss Jansons is one of the best orchestra builders around.” The New York Times

“No conductor has a more extraordinary story to tell than Mariss Jansons.” The Independent

Most valuable is the footage of his father, conductor Arvid Jansons, and of his own early days as a Herbert von Karajan protege...Of Jansons's humanity and penetrating gifts as a conductor we hear heartfelt testimony from the pianist Lang Lang...the Mahler film fully displays Jansons's passionate physical engagement with the music.

The humility everywhere apparent points to the fact that, while much in Jansons's background would indicate musical success...that success was far from assured...The presumptions in the documentary are put well into practice in Mahler's Second Symphony...Jansons deploys his stage forces with such seamless attention to the score that Mahler's eruptions become part of a preconceived plan and not spontaneous outbursts for their own sake.

the excerpts included in the documentary give evidence of his talent. Yet this documentary also offers some insights into Jansons' artistic temperament, which support the music which he interprets so well...Jansons captures the style of the work from the start, with a dramatically charged interpretation of the opening funeral march...The visual aspects of the DVD fit the music, with crisp images, realistic color and well-thought videography.