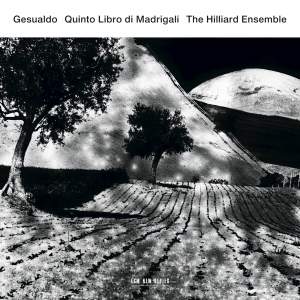 Few vocalists if any could match this group for their tuning. In works such as Dolcissima mia vita) with its chromatic ending and its flickering lines at the word 'fire'), the effect is superbly... — BBC Music Magazine, July 2012, More…

For their latest album for ECM, and over 20 years after their first recorded foray into Gesualdo with his Tenebrae Responsories (8438672), The Hilliard Ensemble turn again to the music of the Italian nobleman, this time to sing the entire Fifth Book of Madrigals.

An aristocrat who forged an idiosyncratic style of musical expression, Don Carlo Gesualdo, Prince of Venosa, was one of those composers in music history who can truly be described as being ahead of his time: the creator of a harmonic language bold almost to the point of anarchy, whose every unpredictable interval was viewed with suspicion by the opponents of musical autonomy and guardians of liturgically based sacred music. A friend of Torquato Tasso and founder of his own academy, to which many leading madrigalists of the 16th and early 17th centuries belonged, Gesualdo was a highly expressive composer and a virtuoso performer on the bass lute.

Yet his chromatic progressions baffled his contemporaries and had to wait until the 19th century era of high Romantic period to find resonance in artistic parallels. Among his most important compositions are six books of five-part madrigals dating from between 1594 and 1611. The last two books in particular – this recording by the Hilliard Ensemble brings new performances of Book 5 – displays his dissonant musical language with its extreme harmonic disruptions, striking tempo contrasts and a distinctly modern feel for drama.

The Hilliard Ensemble’s expressive singing, here also featuring soprano Monika Mauch and countertenor David Gould, conjures up that sound described by the great music historian Hans Redlich as growing out of “the antithesis between extravagant/debauched eroticism and self-castigating longing for death”.

Few vocalists if any could match this group for their tuning. In works such as Dolcissima mia vita) with its chromatic ending and its flickering lines at the word 'fire'), the effect is superbly assured and focused...there are some fine tracks, and the exquisitely searing high voice of Monika Mauch makes an unforgettable entry in 'Languisce al fin'.

Their approach is admittedly dramatic [than Italian ensembles] and they're less intent on milking the potential of every dissonance...The emphasis is placed more squarely on the pieces' trajectories than on the scrunchy details...The Hilliards seem to have found a new lease of life recently. Why indeed not search for dark light in this most paradoxical music.

They show a late-Renaissance composer writing harmonies that are bizarrely chromatic, the line lurching this way and that. And, for some, the question remains: does this music demonstrate eccentricity for its own sake, or does it contain real emotional substance? The Hilliard Ensemble’s vivid performances can only come from an absolute belief in the music’s merits.

the fifth contains its quota of surprises, and the Hilliard Ensemble's carefully modulated accounts let those speak for themselves. Sometimes though, it's all too cultivated and detached, and one longs for something a bit earthier

[Gesualdo's] dissonances were literally centuries ahead of his time, their bold gambits regarded with suspicion by his 16th-century peers, and even now testing the imagination and ingenuity of even as accomplished a team as the Hilliard quartet.

for atmosphere you need to add your own smoke- and drink-filled room, but the music is perfect late-night fare, scintillatingly played.

The Hilliard Ensemble captures perfectly the neurotic frenzy, pathologically dislocated harmonies, mental turmoil and nihilism of these extraordinary works, which can still shock the ear and chill the soul. Wisely, the Hilliards don’t over-egg the pudding: perfect intonation and clear textures allow the music to speak for itself. And how!