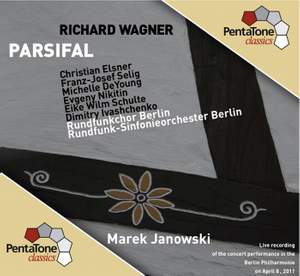 It has spontaneity of something which has sunk so deeply into the performers' minds and souls that they can throw caution to the wind and still be accurate...Elsner is a wonderfully sensitive... — BBC Music Magazine, June 2012, 5 out of 5 stars More…

Act I: Departure of the Knights - Was stehst du noch da? (Gurnemanz, Voice from Above, Chorus)

This is the third release of the very successful Wagner Edition. The first release, Flying Dutchman (PTC5186400) was an Editor’s Choice in the Gramophone. The second, Die Meistersinger, (PTC5186402) was the BBC Music Magazine Opera Choice of the Month in February. “It is a phenomenal achievement of Marek Janowski to have welded his immense forces into such a virtually flawless unity.”

It has spontaneity of something which has sunk so deeply into the performers' minds and souls that they can throw caution to the wind and still be accurate...Elsner is a wonderfully sensitive and expressive Parsifal...But the strongest performance of all is the Amfortas of Evgeny Nikitin...If Janowski's planned cycle...continues like this, it will unquestionably be the finest modern traversal on disc of Wagner's achievement.

these performances sound polished and well cast, revealing diaphanous beauty and detail in the orchestration...Parsifal is distinguished by Franz-Josef Selig’s majestic Gurnemanz

Familiar tropes from previous concerts in this all-Wagner series resurface. Pacing is generally quite quick. Casting and characterisation are naturalistic, apparently written by Wagner. Gurnemanz (Selig) sounds like an inquisitive old squire rather than a retired Wotan waiting to unearth the secrets of the universe. Parsifal (Elsner) is a rough, innocent outsider instead of the chosen one in embryo.

Janowski's approach is pointedly symphonic...[Elsner] proves an inspired choice as Parsifal, dark-toned yet lyrical...DeYoung delivers what is by some margin her most compelling performance to date...She pins you to your seat with her description of her alter ego laughing at Christ...All told, this is a Parsifal - in modern sound - to rank with some of the great performances on disc.

the first benefit that strikes the listener is the quality of the recorded sound...
This is matched by a vivid performance from the orchestra, who have played Wagner brilliantly throughout this cycle so far...Selig is outstanding, anchoring the whole set with gravitas and weight. He sings not only with authority but with outstanding beauty...Nikitin is outstanding at evoking sympathy...DeYoung’s Kundry is outstanding because she gets inside both aspects of the role.

[Elsner has] lyricism and stamina to burn...[de Young] is fully alive to the schizophrenic shifts in mood which Wagner demands...Selig is every bit as eloquent and insightful as you’d expect in the verbose role of Gurnemanz...Janowski paces things immaculately: there’s a serene, lucid radiance to the Prelude and Good Friday Music, and never a hint of anything ponderous or stodgy.

The Parsifal strikes me as one of the finest on disc, easily the best of the past decade, with an avuncular, Sachs-like Gurnemanz in Franz-Josef Selig, an exciting Kundry in Michelle DeYoung, Evgeny Nikitin’s noble, anguished Amfortas (better than in 2010’s Gergiev/Mariinsky set) and, best of all, Christian Elsner’s ideally lyrical and heroic Parsifal.

the set is beautifully engineered, and the presentation immaculate