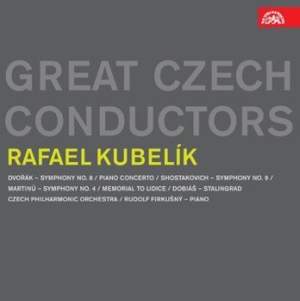 The name of Rafael Kubelík symbolically opens the Supraphon series of archival recordings featuring the most celebrated Czech conductors. Kubelík’s journey to catharsis, which was represented by the legendary performance of My Country at the first liberated Prague Spring festival in 1990, lasted more than half a century.

He first conducted the Czech Philharmonic Orchestra when he was twenty and at the age of twenty-eight (1942) became its chief conductor. The precious recordings on this double CD were made between 1944 and 1948, prior to Kubelík’s emigration. When it comes to Dvořák’s music, one of the cornerstones of the Czech Philharmonic’s repertoire, unique recordings of Kubelík’s singular interpretation of Symphony No. 8 and the Piano Concerto with a spellbinding performance by the young Rudolf Firkušný have been preserved. Yet Kubelík also boldly presented a contemporary repertoire.

The live recording of Shostakovich’s Symphony No. 9 dating from December 1945 (a mere three months after the work was completed!) is probably the very first recording of the work. The onerous experience of the war is also reflected in Martinů’s Symphony No. 4. The unique recordings of the Memorial to Lidice and Dobiáš’s Stalingrad cantata depict the atmosphere of a difficult time. Kubelík’s recordings from the 1940s are a testament to a legendary figure who after another 40 years of conducting leading orchestras abroad would in the spring of 1990 make a triumphant return to liberated Prague.