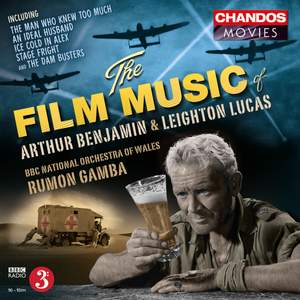 here's British film music for every occasion, with seven samples of Lucas (usually refined, sometimes limp) and a meatier trio by Benjamin. — BBC Music Magazine, May 2012, 3 out of 5 stars More…

II. Walls that Surpass the Imagination

IV. Top of the World and Final Bars

The Man Who Knew Too Much: Storm Clouds Cantata (arr. P. Lane)

Benjamin, A: An Ideal Husband

Arthur Benjamin composed the Storm Clouds Cantata in 1934 for Hitchcock’s first version of The Man Who Knew Too Much. In the 1956 colour remake of the film, the incidental music was composed by Bernard Herrmann, who was offered the opportunity to write his own music for the film’s climax. In an unusual outbreak of modesty, however, he said that he could not improve upon Benjamin’s cantata, so it stayed. In the film, Herrmann can be seen conducting the work a in a 12-minute-long, tension-filled scene at the Royal Albert Hall, during which the heroine must stop an assassin from shooting a visiting prime minister. The assassin has memorised the music by listening to a recording of the work, and waits patiently for the thunderous climax of cymbals which will muffle the sound of his gun…

Also on this disc is Benjamin’s Waltz and Hyde Park Gallop from An Ideal Husband, and the music from The Conquest of Everest, one of his most successful film scores.

Leighton Lucas is particularly noted for his film music, including the scores for Alfred Hitchcock’s Stage Fright, for Ice Cold in Alex, and for The Dam Busters – all represented on this disc. In Portrait of the Amethyst from Yangtse Incident, the music supports scenes of everyday duties aboard the British frigate HMS Amethyst, and culminates in the famous March, with its hint of Heart of Oak, the official march of the Royal Navy. In contrast, the score to the Victorian curiosity Portrait of Clare, represented here with the Dedication, is inspired by piano and other works by romantic composers such as Chopin, Schumann, and Liszt.

All are performed by the BBC National Orchestra of Wales under Rumon Gamba who records exclusively for Chandos. The disc features exquisite performances by a number of soloists – the mezzo-soprano Abigail Sara, pianist Catherine Roe-Williams, and organist Rob Court – as well as the voices of Côr Caerdydd.

here's British film music for every occasion, with seven samples of Lucas (usually refined, sometimes limp) and a meatier trio by Benjamin.