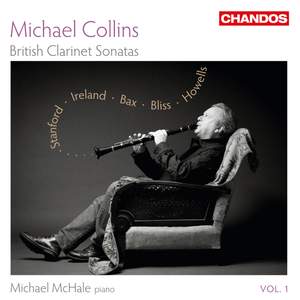 Collins and McHale make a convincing case for these attractive scores. One senses that Collins is a sensitive musician. He certainly has impressive breath control and produces an attractive timbre.... — MusicWeb International, June 2012 More…

Bliss: Pastoral for Clarinet and Piano

Howells: Sonata for clarinet and piano

This is Volume 1 in a new series of British Clarinet Sonatas, featuring the exclusive Chandos artist Michael Collins in works by Bax, Bliss, Howells, Ireland, and Stanford. He is accompanied by the pianist Michael McHale. Their ‘Lyrical Clarinet’ disc received much praise, among others from BBC Music which noted: ‘It’s hard to imagine this programme better played than it is here by Collins and McHale… technically impeccable.’

Stanford is perhaps best known for his larger-scale works, such as his symphonies and the Clarinet Concerto, but he also wrote much delightful chamber music. The Clarinet Sonata is a superb example of the composer’s contributions to this genre, the work displaying distinct echoes of Brahms, before concluding in hushed tranquillity.

Stanford was a Professor of Music at Cambridge and Professor of Composition at the Royal College of Music, simultaneously, for nearly forty years. To list those who studied with him reads like a roll-call of British composers of the first half of the twentieth century, and this disc features the sonatas of two of his students: John Ireland, whose works are closely affiliated with French impressionism, and Howells, whose Clarinet Sonata is dedicated to Frederick Thurston. In his day, Thurston taught many prominent clarinettists, including the soloist on this disc, Michael Collins.

Also on this disc is one of the earliest surviving works by Sir Arthur Bliss who burst onto the British musical scene in the 1920s, writing music inspired by Stravinsky, Ravel, and jazz – music that rebelled against the conservative values represented by Stanford. His Pastoral, however, is an early work, and pre-dates these stylistic extremes.

Sir Arnold Bax described himself as ‘a brazen romantic’, and the Clarinet Sonata recorded here is influenced by Wagner, Richard Strauss, and Debussy, and by Irish and Celtic landscapes and literature.

Collins and McHale make a convincing case for these attractive scores. One senses that Collins is a sensitive musician. He certainly has impressive breath control and produces an attractive timbre. McHale is a poised player who provides sympathetic support and never overpowers the clarinet.

Collins and pianist Michael McHale certainly make the best possible cases for all five of them, fluently allowing the melodic lines to follow their natural curves, and never pressing or asserting themselves too much.