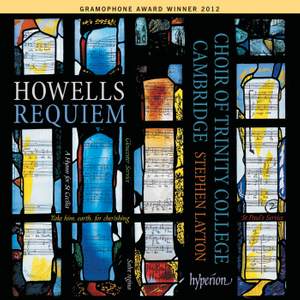 In a work intended to console, it's important that the actual sound the choir makes is warmly consoling. It certainly is in this new Trinity College recording of Howells's 1932 Requiem...It's... — BBC Music Magazine, June 2012, 5 out of 5 stars More…

VI. I heard a voice from heaven

Howells: All my hope on God is founded

Herbert Howells was acutely sensitive to the transience of life, having witnessed the loss of friends and contemporaries in the First World War and encountered deep personal tragedy when his son Michael died of polio at the age of just nine. And so a mood of elegiac yearning inhabits much of his choral music: the austere, lovely a cappella Requiem, and the elegant Take him, earth, for cherishing, commissioned to commemorate the death of President John F Kennedy, here lovingly performed by the young voices of Trinity College Choir, Cambridge, in Hyperion’s Record of the Month for April 2012.

And yet Howells could write magnificently thrilling music too, as demonstrated by the fresh brilliance of A Hymn for St Cecilia, the spine-tingling grandeur of the St Paul’s Service, or the life-affirming hymn ‘All my hope on God is founded’, here further sweetened with a descant by John Rutter.

In a work intended to console, it's important that the actual sound the choir makes is warmly consoling. It certainly is in this new Trinity College recording of Howells's 1932 Requiem...It's fascinating to note, too, the difference undergraduate voices make in this music...The purity of vibrato-free voices is again a major plus-point at the opening of the Gloucester Service...A superb one-stop introduction to Howells's choral music.

a glorious celebration of Howells' sacred output...Gorgeously sung throughout, this is repertoire perfectly suited to Trinity Choir's pure, chorister-like sound. Their graceful, dignified reading of the Requiem, framed within the wonderful acoustic of Ely Cathedral's Lady Chapel, is one to cherish.

Hyperion's disc...is all more impressive for dispelling the clouds of dissonance that have given Howell the bad name of a meandering mystic and letting us hear what a fine ear he had...Had good it is to hear the St Paul Service not swallowed up by the dome that cathedral but still buttressed by a mighty Willis beast, belonging in this case to Lincoln...This is a perfect disc of its kind.

Trinity's recording allow[s] the music to be served but not overwhelmed by the choir's first-rate technical ability...The Gloucester service is relaxed and smoothly flowing, though I do wonder whether it's all just a little too coolly handled

Layton's young, mixed choir at Trinity College Cambridge have the perfect voices for this music - fresh, yet with reserves of richness and depth that pay dividends.

Layton's performances have exactly the poise and careful moulding that this rather fragile, deeply felt music needs.