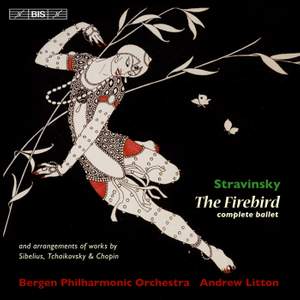 The playing on this disc from Andrew Litton and the Bergen Philharmonic is in many ways marvellous, with a good sense of pace throughout much of the ballet. Recorded sound is sensational, especially... — BBC Music Magazine, May 2012, 3 out of 5 stars More…

Scene 1: The Firebird begs to be released

Scene 1: The Princesses play with the golden apples (Scherzo)

Scene 1: The Princesses' Khorovod (Round Dance)

Scene 1: The entrance of Kastchei the Immortal

Scene 1: The Princesses plead for mercy

Scene I: The Firebird enters

Scene 1: Dance of Kastchei's retinue under the Firebird's magic spell

Scene 1: Infernal Dance of Kastchei and his subjects under the Firebird's magic spell

Stravinsky: The Sleeping Beauty, Op. 66 (arr. I. Stravinsky for orchestra)

Sibelius: Canzonetta, Op. 62a, from the incidental music to Kuolema

Following the success of their recordings of Stravinsky’s Rite of Spring and Petrushka, the Bergen Philharmonic Orchestra and Andrew Litton here perform The Firebird.

The Firebird was Igor Stravinsky’s first full-length ballet, but not his first collaboration with Diaghilev and his Ballets Russes – he orchestrated two piano compositions by Chopin (also featured on this disc) for use in another project.

The disc also includes arrangements of pieces by Tchaikovsky and Sibelius, ending with Stravinsky’s tongue-in-cheek 1955 Greeting Prelude for the 80th birthday of Pierre Monteux.

The Bergen Philharmonic’s disc featuring The Rite of Spring and Petrushka was met with critical acclaim – short-listed for a 2011 Gramophone Award, named Editor’s Choice in Classic FM Magazine.

The playing on this disc from Andrew Litton and the Bergen Philharmonic is in many ways marvellous, with a good sense of pace throughout much of the ballet. Recorded sound is sensational, especially in surround...The caveat, though, is that...there is much excellent music-making but not such convincing drama.

Litton allows [The Firebird] more delicacy than some of its later interpreters, to its great advantage in such moments as the very opening...If Kashchey has sounded more formidable in the hands of others (including the composer himself), Litton gives the old sorcerer a spectral quality that is at least as sinister. It is all beautifully played, not least thanks to a woodwind section of players who really listen to one another.

the fine grain of the recording ensures that nothing in this remarkable score is missed; the Bergen orchestra really is a very fine ensemble these days. Yet too often it's hard to believe that this is a work that was intended for the theatre