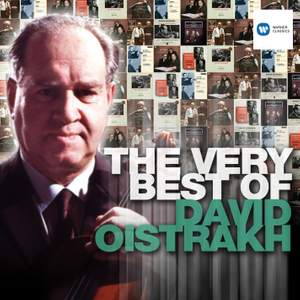 The Very Best of David Oistrakh

David Oistrakh is generally considered to be one of the very finest violinists of the 20th century. Born in the Ukraine of Jewish parents in 1908, Oistrakh received his musical training in his home town of Odessa. He made his first public appearance at a concert in 1914 and gave his own first recital in 1924. He moved to Moscow in 1928 and successfully developed his career both in Russia and abroad until the start of the Second World War, during which he played tirelessly in hospitals and factories and gave many concerts to entertain the Russian troops. After the war, he was one of the first Soviet musicians regularly allowed to visit the West and, despite the bureaucratic difficulties involved in making recordings abroad, Oistrakh began recording for EMI in 1953. He continued to make outstanding recordings for the company, both with his own regular accompanist, the pianist Lev Oborin, and with leading international orchestras and conductors up till the time of his death. He was the recipient of many awards and honours, and his great talent and genial nature enabled him to become one of the principal cultural ambassadors for the Soviet Union to the West. He died of a heart attack in Amsterdam in 1974.

The first CD opens with a complete performance of one of the great masterpieces of the violin repertoire, the Violin Concerto in D by Brahms, which Oistrakh performs with the famous Cleveland Orchestra under George Szell. This is followed by the slow movement from Beethoven’s Triple Concerto in which Oistrakh joins his two eminent Russian colleagues, the cellist Mstislav Rostropovich and the pianist Sviatoslav Richter, with the Berlin Philharmonic Orchestra under Herbert von Karajan in one of EMI’s all time best-selling classical recordings. The CD ends with Prokofiev’s Violin Concerto No.2, recorded in London with the Philharmonia Orchestra under Alceo Galliera in 1958.

The second CD opens with an example of Oistrakh as a consummate performer of chamber music in the opening movement of Schubert’s Piano Trio No.1. Oistrakh is heard here with his pianist colleague, Lev Oborin, and the cellist Sviatoslav Knushevitsky, who all performed regularly together as a piano trio. Next comes Tartini’s ‘Devil’s Trill’ Sonata with the pianist Vladimir Yampolsky, followed by a group of attractive short ‘encore’ pieces by Kodály, Wieniawski, Ysaÿe and others, mostly arranged for violin and piano from compositions from other genres including piano solos like Debussy’s ‘Clair de lune’ and Tchaikovsky’s ‘Valse-Scherzo’. The CD finishes with the lively second movement ‘Scherzo: Allegro’ from Shostakovich’s Violin Concerto No.2, written in 1967and dedicated to Oistrakh, and the finale ‘Tarantella: Presto’ from Taneyev’s colourful ‘Suite de Concert’.