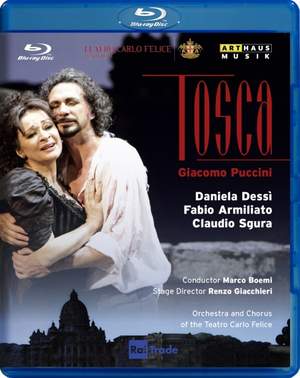 This is a good, conventionally designed Tosca, well sung and played and with a satisfying theatrical flair. — MusicWeb International, August 2012

This production from the historic Teatro Carlo Felice in Genova, Italy, stars the opera world’s power couple, Daniela Dessì and Fabio Armiliato, as lovers Tosca and Cavaradossi. A tragic tale of doomed love interlaced with the age-old themes of jealousy, lust and intrigue, has ensured Tosca its place in the top ten of opera favourites.

The task of putting Tosca on the stage in a way that is credible and timeless is both straightforward and difficult. For the three main roles – the unscrupulous police chief Vitellio Scarpia and the painter Mario Cavaradossi, who provide a framework for Floria Tosca, “a famous singer” (both on stage and in real life), all you need is star performers of the required virtuosity, although they do need to display a certain enjoyment in performing – something one has never been able to take for granted in music theatre.

It should be made clear from the outset that the 2010 production at the Teatro Carlo Felice zu Genua, with its stage set based on Adolf Hohenstein’s original design for the work’s premiere, ticks all the boxes. Probably the best contemporary soprano-tenor combination (a couple in real life, too) – Daniela Dessì and Fabio Armiliato – are ranged against a worthy opponent in the form of Claudio Sgura as Baron Scarpia.

This is a good, conventionally designed Tosca, well sung and played and with a satisfying theatrical flair.