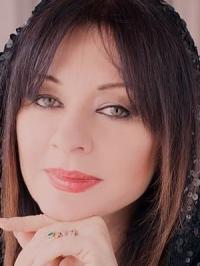 The Italian soprano Daniela Dessì was born in Genoa in 1957 and studied in Parma and Siena, making her debut in 1979 in Pergolesi’s La serva padrona and winning the RAI International Vocal Competition the following year.

She was particularly associated with spinto repertoire, such as the title-roles in Puccini’s Tosca, Manon Lescaut, Turandot and La fanciulla del West, Verdi’s La Traviata and Aida, and Giordano’s Fedora, though she also made successful forays into the heavier bel canto roles such as Norma, Lucrezia Borgia and Matilde in Guglielmo Tell. Her discography includes Elisabetta (opposite Pavarotti) in Riccardo Muti’s Don Carlo from La Scala ('Dessi looks the very image of the wronged, sympathetic Elisabetta and sings with feeling and good phrasing’ – Gramophone Guide), Rossini’s Petite Messe Solennelle under Riccardo Chailly, and the title-role in Norma from Bologna, under Evelino Pidò.

Dessì died of cancer in 2016, aged just 59; she was very much in her vocal prime and continued to perform until very near the end of her life. She is survived by her husband Fabio Armiliato, alongside whom she often performed.

Find out more at https://en.wikipedia.org/wiki/Daniela_Dessì