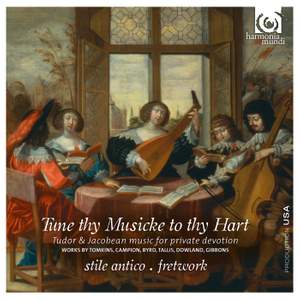 Tune thy Musicke to Thy Hart

a varied treasure trove of seldom heard but extremely affecting music, nicely sung and spliced together with some darkly-glittering string In Nomines played by Fretwork...[They] easily persuade... — BBC Music Magazine, April 2012, 4 out of 5 stars More…

Ramsey, R: How are the mighty fall’n: Gloria

Browne, J: Jesu, mercy, how may this be?: Agnus Dei

Croce, G: From profound centre of my heart

Dowland: I shame at my unworthiness

Byrd: Why do I use my paper, inke and penne?

Stile Antico (joined by Fretwork) explore long-neglected repertory: the wealth of Tudor and Jacobean sacred music written for domestic devotion, rather than for church worship. Culled from collections intended for use in private homes, these pieces by Tomkins, Campion, Byrd, Tallis, Dowland, Gibbons and others, offer a unique insight into the turbulent religious climate of the time and the thriving musical culture at its heart.

Stile Antico is now established as one of the most original and exciting voices in its field. Much in demand in concert, the group performs regularly throughout Europe and North America. Their recordings are the best-sellers on the harmonia mundi label, winning awards including the Diapason d’or de l’année and the Preis der deutschen Schallplattenkritik, and have twice attracted GRAMMY nominations. Their release Song of Songs won the 2009 Gramophone Award for Early Music and reached the top of the US Classical Chart.

Few ensembles can match the breadth of Fretwork’s repertoire, which ranges from the first printed collection published in 1501 in Venice to music commissioned by the group this year. In the 25 years since its debut, Fretwork’s pioneering work has taken its members all over the world. Their consistently high standards have brought music old and new to audiences hitherto unfamiliar with the inspiring sound-world of the viol.

Fretwork’s acclaimed recordings of the classic English viol repertory – Purcell, Gibbons, Lawes, Byrd – have become the benchmark by which other performances are measured. Its arrangements of the music of J. S. Bach have garnered particular praise. Released in 2009, the harmonia mundi recording of Purcell’s Complete Fantazias won the Gramophone Award for Baroque Chamber Music.

a varied treasure trove of seldom heard but extremely affecting music, nicely sung and spliced together with some darkly-glittering string In Nomines played by Fretwork...[They] easily persuade us that there is such a thing as beautiful simplicity.

Stile Antico's sleek tuning and supple attention to words, and the studio recording, intimate but not claustrophobic, do bring a carefully plotted span (over 120 years) of sacred styles into our listening rooms with rare success.

The beautifully blended voices of Stile Antico give this music with all the intensity that its emotional content merits. But then every work here fairly burns itself on the heart.

We are, perhaps, in a wood-panelled Elizabethan hall, where in the early 17th century the family of a large house gather for their private prayer. Voices and viols mix in harmony, ranging from the familiar simplicity of Thomas Campion's "Never weather-beaten sail" to the elaborate verse anthem by Orlando Gibbons's "See, see the word is incarnate"...Another triumph

the performances are wonderfully fresh, revelling in the harmonic false relations and affectingly attentive to the import of the words.

The group's singing is, as ever, breathtakingly beautiful

another winner from the 12-voice ensemble Stile Antico... The two pieces by Thomas Tomkins, O praise the Lord and When David heard, epitomise the expressive richness of the style. But the simplicity of Campion’s Never weather-beaten sail is also gorgeous, and there’s an unexpected rocking figure, John Browne’s much earlier Jesu, mercy, how may this be?, that becomes a real earworm. The contributions of the viol consort Fretwork are equally fine