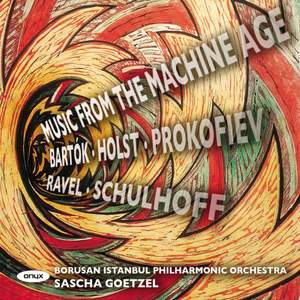 Music From The Machine Age

the boisterously confident Borusan Istanbul Philharmonic cuts another lively swathe through colourful 20th-century repertoire...[In the Bartok] The Turkish players and their Viennese conductor... — BBC Music Magazine, May 2012, 3 out of 5 stars More…

Ballet Music: The Perfect Fool: I. Introduction and Dance of the Spirits of the Earth

Ballet Music: The Perfect Fool: II. Dance of the Spirits of Water

Ballet Music: The Perfect Fool: III. Dance of the Spirits of Fire

Another orchestral tour de force from Sascha Goetzel and this outstanding orchestra: after their acclaimed debut recording for ONYX of Respighi, Florent Schmitt and Hindemith, the Borusan Istanbul Philharmonic Orchestra and their charismatic Viennese music director have devised a fascinating programme of ballet music composed during the turbulent inter-war years of the 20th century.

The music reflects the edgy, dangerous and turbulent political and social landscape of the period. This is music of great rhythmic vitality: Ravel’s refracted memories of a vanished Habsburg Vienna destroyed by the 1914–18 War, to the primitive barbarism of Prokofiev’s 'Scythian Suite' and the lurid violence of Bartok’s 'Miraculous Mandarin' with its themes of lust, criminality, prostitution and murder.

Schulhoff’s ballet 'Ogelala' like Prokofiev’s score concerns pagan rituals and warring tribes, and a young couple who are meant to kill each other, but end up falling in love.

Holst’s comic opera, 'The Perfect Fool', written in 1918–22, begins with a ballet which is danced by Spirits of Earth, Water and Fire. The score is brilliant – and though less concerned with human drama than the other works on this disc, the drive, energy and sheer brilliance of Holst’s score is very much of its time.

the boisterously confident Borusan Istanbul Philharmonic cuts another lively swathe through colourful 20th-century repertoire...[In the Bartok] The Turkish players and their Viennese conductor offer muscular strings, dirty slithering brass, but sagging momentum. Yet it's fascinating to hear the suite alongside other music similarly influenced by the period's big shocker, Stravinsky's Rite of Spring

There's something uniquely exciting about hearing a keen young orchestra devouring difficult but exciting music whole, which is precisely what the Borusan Istanbul Philharmonic does...Most of the orchestral playing delivers in spades and the sound quality is very good too, if occasionally wanting in inner detail. So, taken as a whole, this is an exciting CD (the orchestra's second for Onyx) that deserves the widest currency.

These five pieces ably summarise the ferment of creativity unleashed in the
aftermath of the First World War...Most fascinating of all is the Ogelala ballet suite by Erwin Schulhoff, a Czech composer who died in a Nazi concentration camp: it most clearly exhibits the liberating influence of Stravinsky's The Rite of Spring.

A brilliant idea: to assemble five ballets from the 1910s or 1920s that are all supposedly inspired by the mythological past, yet evoke the violence of the “machine age”...The Turkish all-stars give hard-edged performances under Sascha Goetzel.