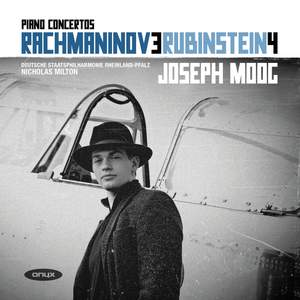 Moog makes easy sense of it all, his light, glittering touch deftly partnered by Nicholas Milton and his Ludwigshafen-based orchestra...it comes as no surpise that he chooses the more mercurial... — BBC Music Magazine, June 2012, 4 out of 5 stars More…

The outstanding young German pianist Joseph Moog makes his debut on ONYX with a superb disc of two great Russian piano concertos that have had very different fates.

Anton Rubinstein’s 4th was once one of the most famous and popular concertos in the repertoire, and many of the major virtuosos performed this work into the early years of the 20th century – when the composer’s other works vanished from the concert hall. He composed 5 piano concertos which can be considered as the models for those of Tchaikovsky and later Rachmaninov. Well written for the piano and the orchestra, Rubinstein’s 4th is the archetypal Romantic concerto – big tunes, big gestures, and plenty of exciting finger - work for the soloist. The neglect of this work today is hard to understand.

Rachmaninov’s 3rd concerto was one of the works that swept Rubinstein’s concertos from the concert platform. Its combination of virtuosity, symphonic structure, plus the hallmark Rachmaninov gift for melody has made this one of the most popular works in the repertoire, from the time of its premiere in the USA, with the composer as soloist and Mahler conducting. It is one of the most technically demanding concertos in the repertoire.

Joseph Moog has already established a formidable reputation as virtuoso and received rave reviews for his recent Liszt Concertos recording.

Moog makes easy sense of it all, his light, glittering touch deftly partnered by Nicholas Milton and his Ludwigshafen-based orchestra...it comes as no surpise that he chooses the more mercurial of the two cadenzas options, though he can pull out the big guns at the the central climax of the Intermezzo...Moog is a pianist of transcendental technique whose future should be well worth following.

this 24-year-old German pianist may occasionally sound more relentless than giving, though the chill wind he blows through even the most lyrically assuaging passages will seem authentic to some...Less generally, Moog is at his most interesting in the mercurial twists and turns he gives the cadenzas...There may be more affecting Rachmaninov Third Concertos on record...but it is certainly among the most formidable.

Moog’s is a talent worth watching