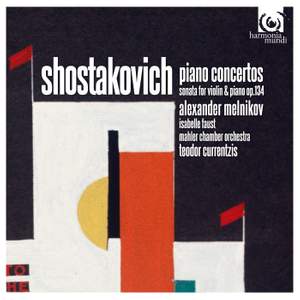 his lightning switches of tempo and mood in the fast movement outdo most competitors for bizarrerie...Melnikov includes a searing, thrilling account of Shostakovich's late Violin Sonata, Op.... — BBC Music Magazine, April 2012, 5 out of 5 stars More…

Shostakovich’s music is often 'two-faced', sometimes sublimated in ecstasy and joie de vivre, sometimes plunged into emptiness and suffused with a death wish. Accompanied by the Mahler Chamber Orchestra under the direction of Teodor Currentzis, Alexander Melnikov captures this feeling admirably in the Concertos Opp.35 and 102, and perhaps still more poignantly – “with disarming sincerity and fearless directness”, to quote his booklet note – alongside Isabelle Faust in the Sonata Op.134.

“The coupling of the Second Piano Concerto and the Violin Sonata on this CD is by no means accidental. In terms of musical language the two pieces stand so far apart that it is difficult to comprehend how the same composer could have written them both. It is true that from its inception the sonata bore the stamp of ‘inaccessibility’, supposedly impossible for a listener to digest, and has never quite achieved the popularity of its counterparts for cello and viola. This music is as far from ‘easy listening’ as it gets. On the other hand the second movement of the Second Concerto is routinely included in ‘light classics’ compilations, broadcast by radio stations and played through headphones to airline passengers or CAT patients to ‘make them feel good’.” Alexander Melnikov

his lightning switches of tempo and mood in the fast movement outdo most competitors for bizarrerie...Melnikov includes a searing, thrilling account of Shostakovich's late Violin Sonata, Op. 134, in which he partners the very impressive Isabelle Faust...Unhesitatingly recommended as one of the best versions of all three works currently available.

I’ve never found Melnikov’s tone so pearly, and the Mahler Chamber Orchestra’s strings have a discipline and suavity that are second to none. If you want Romanticism with a big R in the slow movements and plenty of fixed manic grins and wild funhouse careening elsewhere, this is as good as it gets.

The hide-and-seek games between piano and orchestra in the first movement are delectable enough. But then the slow movement...to call this breathtaking would be an understatement. Starting at a whisper, Melnikov fines his sound down to the threshold of audibility and extends phrase-endings until the world seems to stand still...For me, this is Shostakovich-playing on a level of inspiration I have only heard in my dreams.

Melnikov offers brilliant accounts of both Shostakovich's Piano Concertos here - the neoclassical First, enlivened by sparkling trumpet interjections from Jeroen Berwaerts, and the cheerfully lyrical Second. Isabelle Faust's performance of the Violin Sonata is the perfect complement to them, completing an award-winning disc.

Here, Shostakovich’s 12-note melodies take on a peculiar, tonal cast, and the work’s emotional trajectory is made utterly absorbing...Melnikov’s approach to the Concerto no 1 makes the work a breezier, more optimistic affair than usual. He’s right – despite the minor-key histrionics, this is a youthful, confident display piece, composed before the repression of the Stalin years.