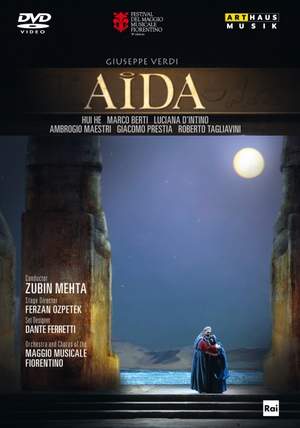 Vocally, there are strengths and weaknesses. Lucaina D'Intino's Amneris operates on the grandest scale, fired by energy and passion. Marco Berti's Radamès is solid but stiff...Ambrogio Maestri's... — BBC Music Magazine, August 2012, 2 out of 5 stars More…

Zubin Mehta conducts Aida, Verdi’s most spectacular and over-the-top opera, in a new production from the Teatro del Maggio Musicale Fiorentino. Starring Marco Berti, Luciana D’Intino and Hui He. Verdi’s Aida is one of the most popular operas of all time. It premiered at the Cairo Opera House on Christmas Eve, 1871, and was an immediate commercial success. The plot of Aida is filled with political intrigue, love, betrayal, passion, and vengeance, and has captivated audiences for generations. What piqued general curiosity about this new production of Aida was undoubtedly the operatic debut of Ferzan Ozpetek, a Turkish auteur who, after settling in Italy as a student, has become one of the most prominent directors of Italian cinema in the last decade, directing acclaimed films as “La finestra di fronte” (Facing Windows) and “Mine Vaganti” (Loose Cannons).

Vocally, there are strengths and weaknesses. Lucaina D'Intino's Amneris operates on the grandest scale, fired by energy and passion. Marco Berti's Radamès is solid but stiff...Ambrogio Maestri's Amonasro is powerful but rough-hewn. There's an excellent Ramfis from Giacomo Prestia...[He's] acting is on the same level as the rest of the cast, but her singing of this demanding role is less accomplished

Mehta realizes the differing aspects of the score, from the intimate to the more spectacular outbursts, drawing the necessary colours from the Florence orchestra and building climaxes in rousing manner...[Hui He] should win a sympathetic response for Aida's plight...Luciana D'Intino pulls out all the stops, with much use made of chest-voice, as possibly/probably the most interesting player in the opera.