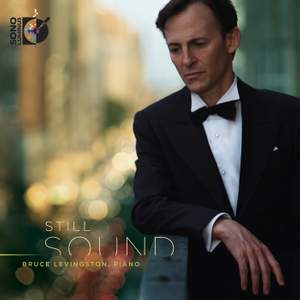 Gross, A: Venturing Forth Anew

Gross, A: Dance of the Spirits

Gross, A: Reflections on Air

Reflecting on this album, Levingston writes, “As I first listened to this collection of intimate, gentle music, I kept thinking how much it evokes a feeling of timelessness and stillness. From the minimal sounds of Arvo Pärt and Erik Satie to the reflective pieces of Augusta Gross and William Bolcom, each work, their harmonic and rhythmic movement notwithstanding, suggests a kind of spiritual stasis. Even the Romantic works of Schubert and Chopin, with their moments of surging emotion, possess magical, hypnotic qualities that lull the listener into a state of calm. The consistent impression of tranquility and serenity in these beautiful works led me to call this album Still Sound.”

Bruce Levingston is one of the leading figures on the contemporary music scene. Many of the country’s most important composers have written works for him and his Carnegie Hall and Lincoln Center world premiere performances of their works have won notable critical acclaim. The New York Times calls him “[one] of “today’s most adventurous musicians” and describes his performances as “graceful,” “dreamy” and “hauntingly serene”; The New Yorker describes him as “a poetic pianist who has a gift for inventive—and glamorous— programming.” Following a recent performance in the historic Coolidge Auditorium at The Library of Congress, The Washington Post praised his “ wonderfully even touch” and “transparency and timeless reverie, which Levingston projected beautifully.”

Levingston’s first CD for Sono Luminus, Heart Shadow (DSL92137), was comprised of three major piano works inspired by literature of the nineteenth and twentieth centuries. It received high critical acclaim and was named “Album of the Week” by New York City’s WQXR.