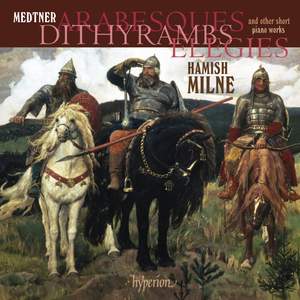 and other short piano works

The humorous Dithyramb No. 2 is surely a masterpiece, and Milne happily strides its Olympian terrain with unforced richness of tone. Medtner's expressive range grows on the second disc...The... — BBC Music Magazine, June 2012, 4 out of 5 stars More…

‘Write one such piece and one can die.’ So pronounced Rachmaninov, no less, after hearing the second of Medtner’s Arabesques. This is just one of the delights in the enticing selection box offered by Hamish Milne, a long-standing and ardent champion of Medtner’s music. These two discs explore the many miniatures—in size though not in ambition—that he wrote throughout his life. The very opening of his Mood Pictures shows a remarkable sophistication for a man barely out of his teens, while the magnificent pair of Elegies forms a fitting conclusion to a set that reminds us that it is sometimes among the ‘miscellaneous’ works that the greatest gems are to be found.

The humorous Dithyramb No. 2 is surely a masterpiece, and Milne happily strides its Olympian terrain with unforced richness of tone. Medtner's expressive range grows on the second disc...The official set of Op. 55 is perhaps the most conventional work here, though Milne's articulates that as beautifully as the rest.

Here is a declaration of musical faith if ever there was one. No pianist has done more for Medtner's reputation than Hamish Milne...[His] playing will surely make Russians, in particular, listen in awe to such magisterial command and poetic empathy...Milne writes his own superb notes, and this is surely in the running for instrumental issue of the year.

As Milne's forthright, utterly secure performances make clear, much of this is strongly characterised music...Milne is a wonderfully persuasive advocate for this distinctive and generally underrated music