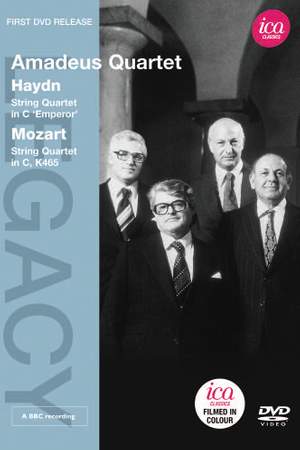 Founded in 1947, the Amadeus Quartet dominated the British chamber music scene for over 40 years. The quartet was renowned for its impeccable ensemble playing as well as sensitive interpretation, making over 200 recordings during their four decades together, which ended with Peter Schidlof’s death in 1987 – just four years after the Royal Opera House performance on this DVD.

The quartet’s Wigmore Hall debut in 1948 was sold out with hundreds turned away at the door. Particularly well known for performances of the Viennese Classics, the ensemble’s core repertoire included all three works on this DVD, performed here with great warmth and exuberance.

Norbert Brainin’s standard answer to how the Amadeus Quartet was able to reach such great mastery of interpretation was that they ‘simply listened into the music – again and again’. The Penguin Guide praises the quartet’s DG recording of the later Haydn quartets as ‘bright and truthful’ with a ‘warm acoustic and plenty of presence’ – ‘outstanding’.

All four members were awarded an OBE, the German Great Cross of Merit, and the Austrian Cross of Honour for Arts and Sciences.