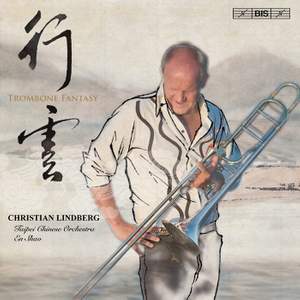 there has been no diminution in his awe-inspiring skills as a trombonist...The engineering is a riot of colour, captured in detail, and dynamic contrasts. — International Record Review, June 2012

On this disc Christian Lindberg joins the Taipei Chinese Orchestra in a programme of works for trombone and Chinese orchestra. The disc also includes one of his own works for the orchestra, inspired by the poetic sounds of the Chinese instruments: The Wild Rose.

Also by Lindberg, Kundraan was originally composed for trombone and chamber orchestra but was re-arranged for this disc.

Yiu-Kwong Chung has here adapted a famous aria from the Peking opera Cursing General Cao Cao into a striking piece in which the solo trombone is supported by the traditional trio of Peking Opera (clapper and drum, descant fiddle and lute) and orchestra.

For the Mongolian Fantasy, a couple of traditional songs and typical Mongolian throat-singing technique have provided the starting point.

Recueillement focuses on the first and last lines of Baudelaire’s poem.

there has been no diminution in his awe-inspiring skills as a trombonist...The engineering is a riot of colour, captured in detail, and dynamic contrasts.