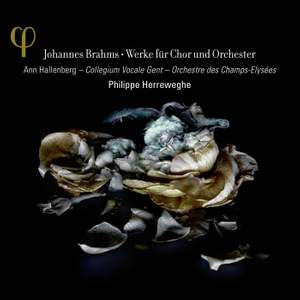 Brahms: Works for chorus and orchestra

This is one of the most impressive collections of Brahms's shorter chorus-and-orchestra works that's come my way for some time. It's partly because of the particular combination of works...But... — BBC Music Magazine, April 2012, 5 out of 5 stars More…

Recording of the Week,  Brahms choral discs from Gardiner and Herreweghe

Gardiner follows his recording of the complete symphonies with an account of the Deutsches Requiem that scores highly on textual clarity, whilst Herreweghe and Collegium Vocale Gent offer luminous performances of the Alto Rhapsody (with Ann Hallenberg as soloist) and Schicksalsied.

For his third album on Phi, his new label published by the group Outhere, Philippe Herreweghe has brought together a splendid set of artists in the Lutoslawski hall in Warsaw. Ann Hallenberg, whose voice won over the public of some of the world’s most prestigious concert halls, takes on the Rhapsody for contralto solo and men's chorus by Brahms while the rest of the programme leads the listener through his essential works for chorus and orchestra. Herreweghe’s long-time affinity with the composer of A German Requiem has enabled him to provide a coherent and personal vision of those musical pages in which Brahms gave free course to his most intimate thoughts.

Collegium Vocale Gent is joined in this endeavour by the members of the Accademia Chigiana of Sienna with whom it formed a European ensemble that was officially recognised as Cultural Ambassador of the European Union just a few months ago. Together with the Orchestre des Champs-Elysées and its authentic instrumentarium, this great choir interprets the Burial Song, the Song of Destiny, the Song of the Fates and the motet Warum ist das Licht gegeben. A great moment for all admirers of Brahms and fans of choral singing at its very best!

This is one of the most impressive collections of Brahms's shorter chorus-and-orchestra works that's come my way for some time. It's partly because of the particular combination of works...But it's also the luminous transparency of the performances themselves that's remarkable...All in all, on many levels, a deeply satisfying recording.

a superbly rich and eloquent example of Brahms's art at its most sublime...Herreweghe allows the music to evolve with a wonderful feeling of spaciousness in which Brahms's often intense musical textures are beautifully revealed...a performance which stands head and shoulders above much of the competition. It is very much the icing on a mouth-wateringly sumptuous cake of a disc.

An extremely enjoyable and very useful anthology...[The Schicksalslied] is given a performance that is an ideal combination of drama and transparency; the orchestral epilogue that closes the work is really lovely. Herreweghe's orchestra is responsive to every detail of Brahms's markings...Hallenberg, with her rich tone and fine sense of line and phrasing, has a way of chaping the text that compels attention.

Hallenberg sings with a ravishingly beautiful tone throughout, and the support from the chorus and orchestra is most impressive...all in all, this is an extremely satisfying disc, and there is much to recommend.

Philippe Herreweghe's survey of Brahms' works for choir and orchestra is flooded with light...The silky portamenti of the strings is a testament to the refinement of the Orchestre des Champs-Elysées.

To hear this music performed with the cool precision and shining transparency of Philippe Herreweghe's forces sends shivers down the spine.

the Dutch conductor reveals that same understanding of, and interpretative sympathy for, Brahms’s music that he brought to his Harmonia Mundi recording of A German Requiem...Hallenberg brings a rapt, mellow, consolatory warmth to the Alto Rhapsody, and Herreweghe taps the Song of Destiny for its potent, spiritual essence.