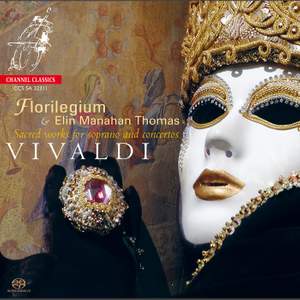 Vivaldi: Concerto for Violin & Cello in B flat minor, RV 547

Recording of the Week,  Vivaldi: Sacred vocal works and concertos

Vivaldi joined the staff of the Ospedale della Pietà in September 1703 as Maestro di Violin. Established in the 14th century, the Pietà was one of four charitable Venetian orphanages for women supported by the state. Vivaldi’s instrumental chamber works cannot be dated with any certainty, nor do we know for whom they were written. Despite this lack of information, we can surmise he produced them for his pupils at the Pietà, perhaps during the late 1720's and 1730's.

Bach, Telemann and several French composers all explored the chamber concerto medium to a great degree. 18th-century Italian composers, who concentrated on opera, sacred and secular music for the voice, appear to have ignored it, with the exception of Vivaldi. Our modern image of Vivaldi is primarily that of a secular composer, yet much of his work was intended for performances in the church. The importance of sacred music for solo voice in the oeuvre of Vivaldi emerges with a bolds statistic: of his fifty or so extant sacred vocal works, thirty are for solo voice.

These sacred pieces reflect the talents of the orphans at the Ospedale della Pietà, which maintained an all-female choir and orchestra responsible for the music in its chapel. Despite its ability to perform choral music at a very high standard, the Pietà also laid special emphasis on works for solo voice.

[Manahan Thomas's] fresh sounding, youthful voice, agile technique and secure intonation are a delight and are qualities that well serve the sometimes theatrical demands of Vivaldi's virtuoso writing...the interspersed instrumental concerots are played with vitality and finesse. Here is a disc from Florilegium that should disappoint few readers and it deserves to do well.

The group's sound is less extroverted than many of its European contemporaries, but unbridled flamboyance would not be appropriate in this programme of sacred vocal music and concertos in the ecclesiastical manner...Overall, the stylish performances on this effectively programmed and well-recorded collection make a strong case for a nuanced and relatively understated approach to Vivaldi.

Elin Manahan Thomas is a youthful, bright and clean soloist with a strong core to the voice, a good instinct for when to apply vibrato and the technical agility required for throwing off Vivaldi's more virtuoso passages.

Manahan Thomas manages all with pleasing athleticism, great textural clarity and an avoidance of anything in the way of intrusive mannerism. She and the sympathetic support provided by Florilegium are sensible to Vivaldi's deftly portrayed images complementing the text...All is played with finesse and affection by soloists and ripienists alike.

this whole disc represents music making of the highest calibre...[Thomas] demonstrate her impressive technique and unmannered natural sound in 'Nulla in mundo'...The most eye-catching piece here is probably the recently discovered Flute Concerto Il Gran Mogol...It is a short, and well-crafted work, and receives a sensitive reading from Ashley Solomon.