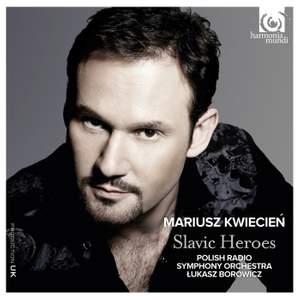 [His signature roles] suggest a certain dashing Italianate quality that's refelcted in his voice: lighter, less rich and chocolatey than some Slavic rivals, for example Dmitri Hvorostovsky. But... — BBC Music Magazine, February 2012, 4 out of 5 stars More…

Moniuszko: Verbum Nobile / The word of a nobleman

Recording of the Week,  Mariusz Kwiecień

Mariusz Kwiecien’s journey to the top of his profession has been remarkably rapid and assured for a young man from Kraków who arrived in New York at the age of 23. The Met’s current Don Giovanni, Polish baritone Mariusz, has won over audiences in many of the world’s greatest opera houses with his powerful interpretations. For his first solo recital he employs his mellifluous and burnished voice to great effect in Polish, Russian and Czech arias which are very close to his heart. A collection of operatic gems, familiar and rare, including the electric final scene from Szymanowski’s ‘King Roger’, which joins Giovanni as his favourite role.

The basis for this recital is refreshing...Kwiecien really enters the spirit of [The Haunted Manor aria], his focused voice blazing forth in what was the composer's barely concealed encouragement of his countrymen after their unsuccessful uprising against the Russians in 1863...The final scene of King Roger, in which the orchestra holds sway for some while, finds the baritone releasing his sound to the fullest.

Kwiecieñ fields wide variety of dynamic and tone-colour to convey dramatic mood...he is greatly aided by the exceptional playing of Borowicz's marvellous orchestra, and indeed by his conducting, which raises this disc high above run-of-the-mill recitals. Their hair-raising account of the finale of King Roger is alone worth the price....This is a lovely disc, thanks to both singer and conductor.

If Kwiecień’s robust delivery of the various set-piece arias make an immediate impact...he is also no slouch when it comes to psychological subtlety, and in the long term it’s the more substantial monologues which stay in the mind after several hearings...The fine playing of the Polish Radio Symphony Orchestra plays no small part in showcasing both singer and repertoire.

His Onyegin...is close to ideal: lyrical, still youthful, attentive to nuances of notes and text. Roger’s ecstatic Hymn to Apollo could hardly be bettered today.

The basic sound – a mix of grit and velvet – is immensely appealing, though there are moments of constriction in his upper registers, and an occasional pulse in his tone. On the plus side, he has a remarkable ability to colour his voice to suit each character, so that Borodin's Prince Igor, thinking of his wife on the eve of battle, sounds very different from Rachmaninov's Byronic Aleko, teetering on the edge of self-destruction.

The Independent on Sunday 22nd January 2012

Like Tchaikovsky's hero, Kwiecien's programme vacillates between hauteur and abandon, contrasting various arias with no apparent strain. The Czech repertoire ("Certova Stena" and "Selma Sedlak") is on a more intimate scale, but "Hymn to Apollo" from Szymanowski's King Roger is divine.

this thoughtfully planned recital holds several welcome discoveries, and Kwiecień’s assured performances are an enticement unto themselves...Apart from passing traces of constriction on top, Kwiecień delivers everything robustly and sensitively, and receives fine, idiomatic support

There’s a husky darkness to the voice. It’s frequently beautiful, but highly expressive, especially when used with real restraint. The attraction of this well-produced aria disc is the repertoire...Play it at maximum volume and weep.

Your head might explode in the final track of Slavic Heroes. Bombarded by treacly tones and the lush eroticism of Szymanowski's Król Roger, this is heady stuff indeed. But it's just one of many such treats on Mariusz Kwiecień's new recording...The sheer lyrical arrogance of his dismissal of Tatyana breaks your heart. And, as if playing the opera for real, his Act 3 aria is palpably neurotic... I cannot wait to hear Kwiecień performing these roles live.