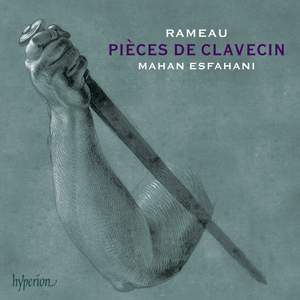 Rameau: Suite No 2 in A minor

David talks to fast-rising star of the harpsichord Mahan Esfahani about his new disc of Rameau's Pièces de clavecin, out on Monday on Hyperion Records.

Gramophone-Award-winning harpsichordist Mahan Esfahani has recorded Rameau’s Pièces de clavecin in the historic setting of the Music Room at Hatchlands Park in Surrey. This is a masterclass for the instrument, confirming this young artist as a truly great player: in the words of International Record Review ‘his technique is beyond criticism and his inherent musicianship goes far deeper than mere surface understanding … it is difficult not to warm to such a musician’.

This double album comprises the whole of Rameau’s output of keyboard suites, and Esfahani rejoices in its wealth of genius, its excitement and drama. Rameau is a composer whose revival is ongoing, and his unique combination of the witty and the cerebral, the light and the curmudgeonly, abounds throughout his harpsichord music.

[CPE Bach's] blend of tradition...and audacity...all captured with unfailing insight by Mahan Esfahani - is contintually beguiling...Esfahani's playing is always considered and often brilliant. At times, the articulation could have been more delicately nuanced, but as a whole this is a splendid guide to Rameau's harpsichord music.

a key factor in determining the longevity of an interpretation is the degree to which the performer succeeds in characterising the music and, on this point alone, top marks must go to Mahan Esfahani, who seems always to have its measure and brings unfailing wit, affection, fluency and pacing to his interpretations.

a special player of his sometimes brittle and recalcitrant instrument. I don’t think I have heard a harpsichord sound as supple and rich in colours as the beautiful Ruckers-built (1636), Hemsch-adapted (1763) instrument he plays in these wonderful pieces.