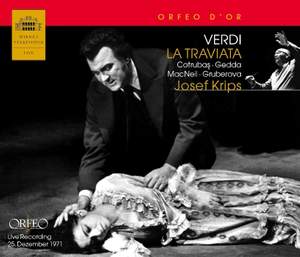 there is Ileana Cotrubas , her local debut in a role that made her famous. The voice is ideal for Violetta, true not not creamy, pure without being white or colourless. Her emotional understanding... — Gramophone Magazine, April 2012 More…

Artistic risks facing a leading company like the Vienna State Opera are new productions of the core repertory. By 1971, when a new production of Verdi’s 'La Traviata' was staged under the musical direction of Josef Krips, the house could already look back on more than 200 performances of the work since the end of the Second World War. Krips himself had already conducted the opera, including a performance in the company’s temporary home at the Theater an der Wien, but none of the three principals had previously appeared in their roles in Vienna. For the protagonist, Ileana Cotrubas, the first night also marked a huge step forward on the road to an international career. Few young sopranos – especially in a performance captured live on the radio – have been as successful in achieving so convincing and touching a balance between the vocal agility needed in the opening act and the lyricism and expressive depth of the following acts of the opera. During the years that followed, Violetta became a role that Ileana Cotrubas was often invited to sing in Vienna and with which she was closely associated not only there but elsewhere too, including appearances at the Royal Opera, Covent Garden and the Metropolitan Opera, New York. Both in New York and in Vienna it was Cornell MacNeil who as Giorgio Germont had the task of persuading her to renounce her love of Alfredo, which he did with his powerful Heldenbariton voice – it was not entirely unexpected when only a year later he appeared in Vienna as Wagner’s 'Flying Dutchman'. Alfredo himself was sung by Nicolai Gedda, who found in the part a particularly congenial Italian role to set alongside so many others in a repertory of almost unimaginable breadth. His phrasing was wonderfully simple and yet precisely adapted to his partners’ needs. Not for a moment did he force his voice and yet the top C at the end of his second-act aria could not have been more perfectly focused. Add to this the clear dramatic accents that he brought to the role, and no one in the audience could have wished for a better performance of the figure of the young lover. The rest of the ensemble, which included a young Edita Gruberova as Flora Bervoix, was admirably attuned to the flexible nature of Krips’s Italianate style of conducting. If only all the classics of the repertory could always be presented on this same high level…

there is Ileana Cotrubas , her local debut in a role that made her famous. The voice is ideal for Violetta, true not not creamy, pure without being white or colourless. Her emotional understanding of the role treads a fine line of pride, sadness, defiance, self-pity and understanding.

the show belongs to Cotrubas from start to finish. On shining form throughout, this Violetta impresses especially in the great scena ending Act 1... Among the currently available 'live' Violettas on CD, it is by far the most affecting...[Krips] gives a notably unfussy traversal of the score. He brings it forth from an orchestra that offers the listener wonderful fullness and sheen, as well as the essential rhythmic punch