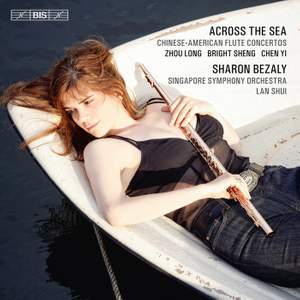 Flautist Sharon Bezaly with the Singapore Symphony Orchestra and Lan Shui here play the music of three composers who are all resident in the USA, but have their roots across the Pacific Ocean, in China. Philosophical, musical and literary aspects of this Chinese heritage are in evidence in the works recorded here.

Zhou Long has composed his Five Elements inspired by the traditional Chinese concept of the five ‘elemental energies’ (wu xing): metal, wood, water, fire and earth. For The Deep, Deep Sea, his shorter, single-movement work, Zhou Long found the title in a poem by the Chinese poet Li Bai (701–762 A.D.), exploring the metaphor of a sea voyage under difficult circumstances.

A later poet, Jiang Kui of the Song Dynasty, has provided Bright Sheng with the inspiration for the second movement of his two-movement work, Flute Moon, while the first movement, entitled Chi-Lin’s Dance, features the mythical Chinese unicorn. The closing work on the disc is Chen Yi’s The Golden Flute, a concerto in three movements, in which the stated aim of the composer has been ‘to let a Western flute speak in the language of Chinese wind instruments, such as the dizi made from bamboo and the xun made from clay.’

There's plenty of trenchant listening alongside the more illustrative soundscapes.