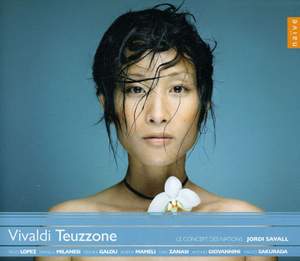 Between 1713 and 1741 Vivaldi produced an enormous amount of music, the most important remnants of which are to be found in the Biblioteca Nazionale Universitaria in Turin. The Vivaldi Edition, a recording venture conceived by the Italian musicologist Alberto Basso (Istituto per I Beni Musicali in Piemonte) and the independent label Naïve, is one of the most ambitious recording projects of the 21st century. Its principal objective is to record the massive collection of Vivaldi autograph manuscripts preserved in the Biblioteca, some 450 works in all. Musicological research has to date identified 49 opera libretti set by Vivaldi and linked him with absolute certainty to 67 different productions. Teuzzone is the twelfth Italian opera that Vivaldi composed. It incorporates a libretto by Apostolo Zeno and was first performed at the Teatro Arciducale in Mantua in 1719 during the Carnival celebrations.

[Savall's] intuitive feeling for rhythm, colour and tempo enlivens recitatives and arias alike. Raffaella Milanesi and Delphine Galou, the prime donne of the opera, are vocally agile and well contrasted...Zanasi is on splendid form as general Silvenio, as his three fine arias testify...here is so much here to tweak our sensibilities.

Le Concert des Nations play with plenty of flair. Even if guitar strumming can be obtrusive, gentler music, such as the emperor Troncone's dignified death in the opening scene, is performed sweetly...This accomplished recording is another distinguished chapter in Naive's epic Vivaldi edition.

There is excellent singing from the small cast, headed by the male sopranista Paolo Lopez, in the name part, and brisk, tidy playing from Le Concert des Nations.