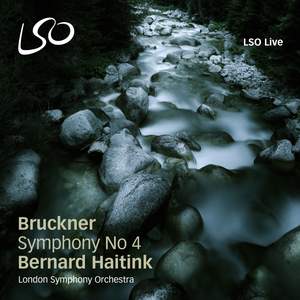 the LSO's principal horn here sets down a wonderful opening benchmark for what follows...Haitink's conducting is a masterclass in the art of control while appearing to stand back and let everyone... — Classic FM Magazine, February 2012, More…

Recording of the Week,  Bruckner and Mahler from Haitink and Pappano

Haitink conducts the London Symphony Orchestra in Bruckner’s Fourth Symphony, whilst Pappano and the Orchestra dell’Accademia Nazionale di Santa Cecilia tackle Mahler’s Sixth in their first-ever recording of the composer’s music together.

Bernard Haitink is internationally renowned for his interpretations of Bruckner and is widely recognised as the world’s leading Bruckner conductor. Bruckner’s Fourth Symphony, ‘Romantic’, conjures up visions of mediaeval knights, huntsmen and enchanted woodland, particularly through the prominent use of the horn in the work. One of his most popular pieces, it was treated to many revisions by the composer and this recording features the second version of the 1877/8 Nowak edition (published 1953) with the 1880 Finale.

the LSO's principal horn here sets down a wonderful opening benchmark for what follows...Haitink's conducting is a masterclass in the art of control while appearing to stand back and let everyone play their best...the whole impressive structure hangs unerringly together...This version easily holds its own with the best.

The Dutch maestro takes a less energetic approach to the Bruckner Fourth Symphony than is currently fashionable, but there’s a breadth and depth to his live performance with the London Symphony Orchestra that matches the long-limned evolution of the music, and the LSO is in top form.

The finale comes off best, with well-integrated tempi, a patient but impressive initial build-up and very good sound. It's a worthy, well-judged performance but with so much strong competition around (not least from Haitink himself) doesn't quite make the shortlist of top recommendations.

Although one might initially ask what a new recording could possibly add...such questions are immediately answered by the resplendent horn playing of David Pyatt, set against a wonderfully shimmering string background, played truly ppp as marked. Indeed, the horns are magnificent throughout...[Haitink] provides a masterclass in how to achieve a weighty sound without ever allowing the texture to become muddy.