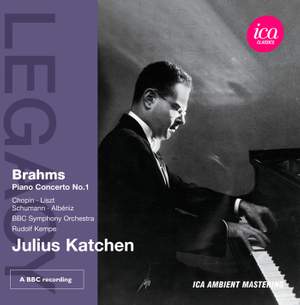 Every bar of Chopin's Third Ballade is illuminated by his stylistic luxuriance and audacity (try the tumultuous rush and glitter in the final bars) and even when almost engulfed by his own virtuosity,... — Gramophone Magazine, March 2012 More…

The American pianist Julius Katchen (1926–1969) was a child prodigy who at age 11 performed with the Philadelphia Orchestra under Ormandy. In 1946 Katchen toured Europe, settled in Paris in late 1947 and became a frequent performer on the European concert platform.

His technique was ‘gold plated’ and despite his early death at aged 43 from cancer, he had a large discography which still sells today. In December 1968 he famously participated in the two-day spectacular known as the Rolling Stones’ Rock and Roll Circus, playing the first movement of Mozart’s Sonata K545 and Falla’s ‘Ritual Fire Dance’ from El amor brujo.

Katchen made a major study of Brahms during his career and this 1967 live broadcast of Brahms Piano Concerto No.1, with the distinguished German conductor Rudolf Kempe, reflects his deep understanding of this composer.

This recording gives the collector the rare opportunity of hearing Katchen ‘live’ in comparison to his studio account made much earlier in 1959.

The fill-ups consist of familiar Katchen composers, Chopin and Liszt but also two new additions to his discography, Schumann's Prophet Bird Op.82, No.7 and Albéniz’s Triana.

Completing this CD is a rare interview with John Amis where Katchen discusses his early life including his thoughts on Mozart and Brahms interpretation.

These recordings have never been released before and have been remastered using ICA’s Ambient Mastering process which recreates the atmosphere of the concert hall.

Every bar of Chopin's Third Ballade is illuminated by his stylistic luxuriance and audacity (try the tumultuous rush and glitter in the final bars) and even when almost engulfed by his own virtuosity, his performance of Liszt's First Mephisto Waltz is arguably the most wildly exciting on record....This record is a reminder and a remembrance of a tragic loss but an indelible musical force.