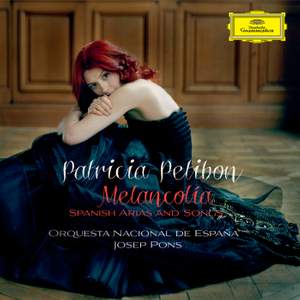 There's a pleasingly rich core to Petibon's voice besides the coloratura heights she's renowned for. She performs with total commitment and without fear and this injects everything she sings... — Classic FM Magazine, February 2012, 4 out of 5 stars More…

Unique for her dramatic flair, expert musicality, and interpretive powers, soprano Patricia Petibon indulges in her love of Luso-Iberian music. From zarzuela to art song, folk song, the Aria Cantilena of Brazil’s Villa-Lobos, and the traditional Afro-Brazilian Ogundé uareré, Patricia Petibon also samples the new. She includes the world-premiere recording of Nicolas Bacri’s song cycle, which was written in dedication to her.

Patricia Petibon adds spice by teaming up with flamenco musicians for one-of-a-kind performances of the zarzuela hit Adios, Granada and the folk tune El vito. Beloved favorites are not neglected: Petibon’s take on La tarántula, Marinela, Canto negro, and La petenera sparkle with light and life.

There's a pleasingly rich core to Petibon's voice besides the coloratura heights she's renowned for. She performs with total commitment and without fear and this injects everything she sings with tremendous character.

A remarkable achievement: a fan letter to Spanish music (not excluding South America or an excursion to Villa-Lobos's Brazil) including a new commission from Nicolas Bacri. It's carried out with aplomb...Petibon is especially effective in the zarzuela numbers...Throughout, Petibon's acting and character skills evidently lift each interpretation...Hugely recommended.

a more apt title is would be hard to imagine...This is in every respect a superlative disc and demonstrates yet again that in Patricia Petibon we have a singer with a real gift for vivid and colourful performances supported by an impeccable technique and real all-round artistry. This is not the best thing she has ever done, simply because just about everything she does is exceptional.