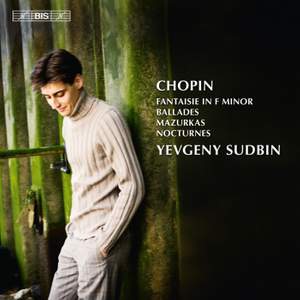 Sudbin gets my vote right at the start here by opening his Chopin recital with the Fantasy in F minor, one of the pinnacles of the composer's art...Sudbin captures its improvisatory qualities... — BBC Music Magazine, December 2011, 3 out of 5 stars More…

Sudbin opens this disc with the expansive Fantaisie in F minor – sometimes described as the composer's 'grandest work' – continuing with a selection of pieces from three genres that are strongly associated with Chopin: Mazurkas, Nocturnes and the Ballades Nos 3 and 4.

Sudbin’s approach to Chopin’s music has been influenced by the composer’s own words regarding interpretation: 'Simplicity is the highest goal, achievable when you have overcome all difficulties.'

In his own paraphrase of the composer’s Minute Waltz, entitled À la minute, Sudbin displays all of his skills that led Piano Magazine to describe him as 'a fearless technician with an all-encompassing command of his instrument; a musical dramatist of exceptional acumen and sophistication; a poet who moves seamlessly between unbridled rhetoric and extreme intimacy; a stylist who catches the particular spirit of everything he plays'.

Sudbin gets my vote right at the start here by opening his Chopin recital with the Fantasy in F minor, one of the pinnacles of the composer's art...Sudbin captures its improvisatory qualities and unexpected shifts of texture. It's a satisfying start to this disc by a thoughtful pianist. But he loses my vote in some of the Nocturnes and Mazurkas...He redeems himself with powerful, poetic performances of the Third and Fourth Ballades

Sudbin is at his most convincing in those larger musical canvases, whose sense of theatricality, emotional range and formal complexities he projects very vividly; the haunted, dark-hued account of the Fantasy is particularly impressive. But the smaller pieces respond less well to Sudbin's treatment: it's not heavy-handed, but places extra expressive weight on pieces that need a much more refined and delicately coloured approach

This glorious disc confirms Yevgeny Sudbin as one of the most searching and inspired of today’s pianists...The playing is so beautiful, so full of life and so rich in imagination that all one really wants to do is sit back and listen to it over and over again without necessarily analysing what it is that makes it feel so “right” and so stimulating...This is a disc not to be missed. It is a triumph.