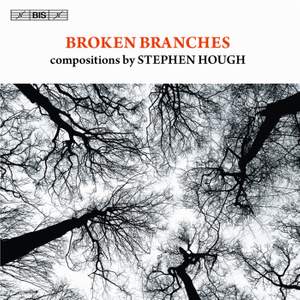 One of the finest pianists performing in the world today, Stephen Hough here turns to composition in a disc of his works. This disc was compiled to celebrate Hough’s 50th birthday.

Having composed music from the age of six, The 2005 work The Loneliest Wilderness was the ‘first serious piece in two decades’, but this has been followed by a steady stream of works.

The principal work on this disc is the Sonata for Piano Broken Branches, with the première taking place at Wigmore Hall in June 2011. At a glance, the work looks to be a set of miniatures, but Hough maintains there are lots of links between the pieces. And the end marks a return to the beginning, but now autumn has become spring.”

This work is accompanied by some of Hough’s other important works: Was mit den Tränen geschieht was commissioned in 2009 by members of the Berlin Philharmonic, and 5 Herbstlieder – a setting of five autumnal poems by Rilke, here performed by baritone Jacques Imbrailo who performed the world première of the work in 2010.

The elegiac The Loneliest Wilderness is based on a previous song setting by Hough of a poem by Herbert Read, and again the work was written for a close collaborator of the composer, namely Steven Isserlis who performs it here together with the Tapiola Sinfonietta conducted by Gábor Takács-Nagy.

'There’s something awe-inspiring about the sheer multifariousness of Stephen Hough’s achievements.' The Daily Telegraph

His eclectic tonal style embraces a wide array of influences yet maintains its own personality....In short, Hough's music speaks with susbtance, fluent ease, confidence and communicative immediacy. That makes him a real composer. It goes without saying that Hough and his colleagues serve up ideal, splendidly engineered performances. A cherishable release.