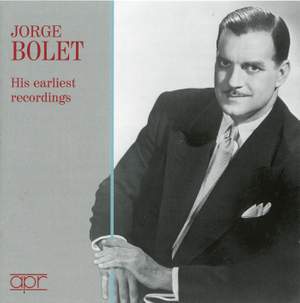 This invaluable reissue of discs dating from 1952-53 is a reminder of Jorge Bolet's early stature. The first-ever recording of Prokofiev's malignant, ferociously demanding Second Concerto is... — Gramophone Magazine, December 2011 More…

From the mid 1970’s until his death, Cuban born Jorge Bolet emerged as one of the world’s truly great pianists and one of the last representatives, along with the likes of Cherkassky, Horowitz and Earl Wild, of the great Romantic tradition of pianism. His pedigree was marvellous - a student of Godowsky-disciple David Saperton at the Curtis Institute, there he was also able to play for Godowsky himself and Josef Hofmann. He won the Naumburg competition in 1937 and looked set for a great career, but the war interrupted the flow of things and he struggled through the 1950s & 60s, mainly playing in the USA and not quite making the international ‘big-time’. His big break came with an RCA contract and the release on LP of a stunning live Carnegie Hall concert in 1974. Shortly after, he was signed to Decca and went on to make many award winning discs. But what of the early years? There’s not much, but here, for the first time on CD, we have the four LPs he made in the 1950s. His very first disc was of Latin-American repertoire that he was never to record again. Here also is the first ever recording of Prokofiev’s Second Piano Concerto in a performance that is still up there with the best.

These almost unknown discs are sure to fascinate, and fill an important gap in the mystery of Bolet’s early career.

This invaluable reissue of discs dating from 1952-53 is a reminder of Jorge Bolet's early stature. The first-ever recording of Prokofiev's malignant, ferociously demanding Second Concerto is of so much more than documentary interest...nothing can dim one's sense of Bolet's massive and unswerving authority, a quality at once lyrical and magisterial...A true aristocrat of the keyboard, his warmth and humanity strike you at every turn.