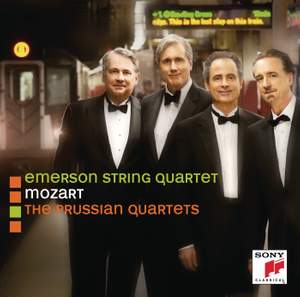 the Emerson Quartet play them very much as they would in a large concert hall: in a powerfully 'projective' manner, with resonant tone, continuous vibrato, well drilled rhythms and, sometime,... — BBC Music Magazine, December 2011, 4 out of 5 stars More…

Debut recording for SONY from one of the world’s greatest string quartets.

The Emerson String Quartet stands alone in the history of string quartets as musicians of unrivalled eminence with an incomparable list of great recordings over three decades.

For its debut on Sony Classical, the Quartet has selected Mozart’s last three string quartets, the “Prussian” quartets. Having recorded Mozart's six "Haydn Quartets" as well as the flute quartets, the Emersons have long desired to add more Mozart to their discography. This new album sees them recording Mozart quartets for the first time in 20 years.

the Emerson Quartet play them very much as they would in a large concert hall: in a powerfully 'projective' manner, with resonant tone, continuous vibrato, well drilled rhythms and, sometime, explosive accents.

There was a time when the Emersons' Mozart was more about sparkling brilliance and textural cleanliness than interpretative fantasy, but nowadays they are more inclined to take their time and imbue their classicism with greater humanity and affectionate warmth. Particularly in the glorious 21st, one senses that this is music that they not only admire but are deeply moved by.

Their aim, 'to strive for elegance, beauty and style', results in interpretations that are technically impeccable and immaculately presented but also subjectively neutral...These barriers to full communication are however eased for K590, where less restricted sound shows the group in a better light. Polished playing is now complemented by improved tonal gradations and more yielding phrasing in both the first and third movements.

The Emerson musicians give plain-speaking performances - a little more cosseting wouldn't have gone amiss though...It was a good choice to have these three works on one disc, and the Emerson's choice of repeats makes this possible

the elegant flow of the musicians’ fingers brings both pleasures and perils. As always, there’s considerable comfort in the certainty of pitch, the warm colours, the general air of civilised ease, matched to music of high artistry. But with this ease comes some further blurring of detail.