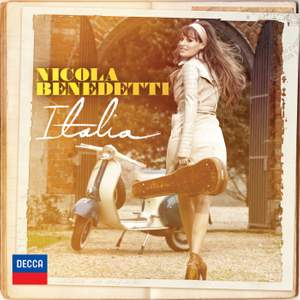 a lively celebration of Benedetti's Italian roots, shot through with some laser-sharp pyrotechnics, and brave work-in-progress as she squares up to period style with a modern instrument...Benedetti's... — BBC Music Magazine, October 2011, 4 out of 5 stars More…

Vivaldi: Concerto In A minor RV358 "La Cetra" I. Adagio-Presto

Veracini: Sonata No. 6 in A Major (from Sonate accademiche op. 2)

Nicola Benedetti’s debut album on the Decca label is her first recording of baroque violin repertoire Recorded in Edinburgh, the album celebrates Nicola Benedetti’s Scottish-Italian heritage as she plays virtuoso Italian masterpieces, accompanied by the leading chamber orchestra of her native country.

The album highlights baroque favourites including Summer from Vivaldi’s ever-popular Four Seasons and Tartini’s famous Devil’s Trill sonata, for which Nicola is joined by a hand-picked chamber ensemble.

The generous selection ranges from the sparkling virtuosity of the opening Vivaldi Concerto Grosso Mogul, to the poignant lament of the Veracini Largo and the lyrical beauty of the two arrangements of Vivaldi vocal works, including the haunting Nulla in mundo pax sincera.

The orchestra is directed from the harpsichord by leading baroque specialist Christian Curnyn.

a lively celebration of Benedetti's Italian roots, shot through with some laser-sharp pyrotechnics, and brave work-in-progress as she squares up to period style with a modern instrument...Benedetti's 'Baroque' occasionally sounds like 'Kreisler with attitude'; the accent may not be pitch-perfect, but for sheer flair: Viva Italia!

This is the best recording of Vivaldi's 'Summer' I've heard...at precisely 2.19 Benedetti performs a trill in which she only partially depresses the string, allowing a rainbow of stratospheric harmonics to colour the trill...Great recordings are made of tiny moments of unexpected brilliance like this

With a Baroque-type bow, using very little vibrato (but with modern strings), she produces a sound that, for the most part, is cool and clear but by no means inexpressive. The SCO match her elegant phrasing and provide an accompaniment that's alert, spirited and sensitive. It conveys a brightly polished image of the music, most enjoyable, and bringing a virtuoso aspect to the fore.

The most blissful performances here are the pair of Vivaldi arias transcribed for violin to take the vocal lines, which are elegant. Elsewhere, Veracini's "Largo" is treated with calm passion

She hasn’t plunged into the field on a whim. She took lessons from Rachel Podger, the goddess of the Baroque violin. For colleagues she cross-fertilised, mixing the period specialist conductor Christian Curnyn with the bouncy non-specialist Scottish Chamber Orchestra. She also chose her repertory cannily...Throughout the disc Benedetti’s playing marries incisive Baroque attack with fuzzier romantic colouring.