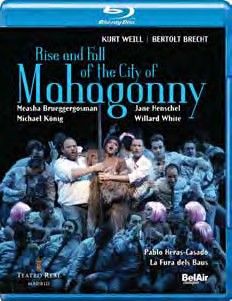 Brueggergosman's Jenny is stunning to behold...[Henschel] has precisely the right dramatic-mezzo instrument for this role, and she can sing sensuously when required...[Easterlin] offers tone... — International Record Review, January 2012 More… 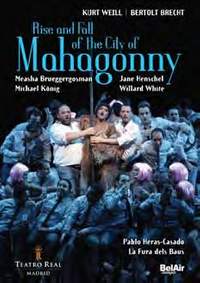 Bel Air present the hard-hitting new production of Kurt Weill’s Rise and Fall of the City of Mahagonny by Catalan collective, La Fura dels Baus, from the Teatro Real de Madrid. Composed in the 1930s by Kurt Weill and Bertolt Brecht, this is a mordant satire on capitalism in a society in which the ultimate crime is not having money. In 20 scenes the authors tell the story of a city lost in the middle of a desert and run by three thugs; in Mahagonny food, sex, gambling and violence rule supreme.

La Fura was founded in 1979 as a Catalan street theatre group. Key features of the ‘Furan’ language were already apparent: interaction with the audience, the use of unusual spaces and the adaptation of the show to the characteristics of each space. Their work for the opening ceremonies of the 1992 Olympic Games in Barcelona, Mediterráneo, mar olímpico brought La Fura dels Baus to an audience of billions throughout the world. Their first foray into opera was with La Atlántida, with frequent collaborator Jaume Plensa, and has developed as far as Wagner’s Ring Cycle and Boris Godunov, a daring reflection on the problem of terrorism, its limits and the manipulation it generates.

Brueggergosman's Jenny is stunning to behold...[Henschel] has precisely the right dramatic-mezzo instrument for this role, and she can sing sensuously when required...[Easterlin] offers tone and diction as clear as a bell, along with a delightfully boyish characterization...[Heras-Casado] has the measure of the piece, as does the Madrid orchestra, which has reached the point where it makes playing a work such as this seem like falling off a log.

Superbly filmed by Andy Sommer, it makes for uncomfortable viewing, particularly during the current economic crisis. You might, however, find it musically less convincing. There's exceptional conducting from Pablo Heras-Casado, but the singing is variable.