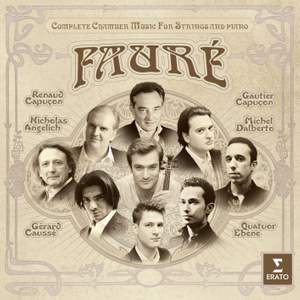 To have a five-disc set of all the pieces involving string, or strings and piano, is an utter delight...They are penetrating and utterly idiomatic, and combine to make a deeply rewarding set,... — BBC Music Magazine, November 2011, 4 out of 5 stars More…

Fauré: Romance in B flat major for violin & piano, Op. 28

Chamber works by Fauré, the influential composer who bridged the Romantic and Modern era in French music, are performed by a magnificent line-up of French and French-trained musicians.

The Capuçon brothers and Angelich – brought together by none other than Martha Argerich – are firmly established as a performing trio. Their recordings of Brahms chamber music for Virgin Classics prompted Gramophone to say that: “Nicholas Angelich and the two Capuçons play in a way that's sure to kindle anyone's enthusiasm for Brahms. Warm, beautifully balanced tone stresses the composer's romantic side, as does the expansive phrasing. There's a feeling of spontaneity, too, as though each player is discovering new aspects to the music while recording it ... the way they are able to strike a balance between Brahms's energetic flow of ideas, his strongly delineated structures and his lyric intensity is most satisfying," while International Record Review felt that “the performances here are both beautiful and individual, with passionate, rich-toned playing and infectious energy.” When they played Brahms’ C minor Piano Quartet with Gérard Caussé at Wigmore Hall in London, the Daily Telegraph (UK) admired the way “they beautifully conveyed the sense of some immense unspoken tragedy lurking behind the music,” adding “but it was the consoling beauty of the slow movement that really told.”

Fauré’s String Quartet, composed at the end of his life, featured on the Quatuor Ebène’s first Virgin Classics CD with works by Debussy and Ravel (who studied with Fauré). It became Gramophone’s 2009 Record of the Year, also winning Germany’s Echo Klassik Award 2009, Belgium’s Prix Caecilia 2009, and, in 2010, France’s Victoire de la Musique. Commenting on the Ebène’s performance of the Fauré, the Independent (UK) commented that “they brilliantly negotiate the contrast between the melancholy cast of the first two movements and the more contented, even animated tone of the final movement, by allowing the lingering impressions of the second movement's see-sawing undulations to haunt the rest of the piece,” while their approach to Debussy – who was born after Fauré, but predeceased him, and whose aesthetic is related to the older composer’s – was summed up thus by Die Presse in Austria: “The Quatuor Ebène ensures that scrupulously conceived musical structures are also sensuous in quality, and the musicians are sensitive to the play of tensions in directional chordal shadings – that beauty in dissonance, so to speak, which can so captivate the listener.”

To have a five-disc set of all the pieces involving string, or strings and piano, is an utter delight...They are penetrating and utterly idiomatic, and combine to make a deeply rewarding set, even if there may be even better accounts of individual movements or works. The performances are generally a joy.

This all-French celebrity team approach Faure with the seriousness of purpose he deserves. They power the music from within, strongly delineating the rhythms, balancing their roles with stylish naturalness...Fabulous Faure playing, with all the intelligence, strength of character and profound understanding that his still underrated chamber music requires.

This is a smartly packaged box and an enterprising release, bringing together the complete works of Faure for string and piano played by a classy roster of artists...[The First Violin Sonata and First Piano Quartet] find Faure at his most open-hearted and the exuberant playing conveys this well. But immediately you're aware of a problem: the boomy, unbeautiful sound quality...If you can get over the sound issues, then there's much fine playing here

It would be hard to imagine greater advocates for Fauré than these superlative French musicians...These discs will provide hours — and years — of pleasure

It is music that, as violinist Renaud Capuçon says in an introduction to this superb set, he and his cellist brother Gautier have played throughout their careers, and such familiarity with music that gives up its expressive secrets and intimate thematic connections reluctantly, pays dividends in every performance here...it's a real treat to hear chamber-music playing of such assurance and enquiring intelligence.

This set has top-flight casting from among the most gifted young musicians of the day. Their sensibility in Fauré’s chamber music can be appreciated in all manner of subtleties...with the Quatuor Ebène supreme in the String Quartet.