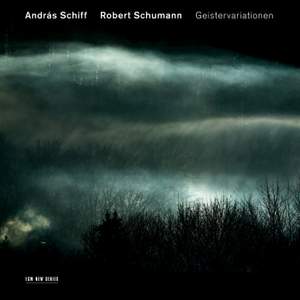 if you want the living definition of virtuoso pedalling, listen to Andras Schiff in the 'Aria' movement of Schumann's F sharp minor Sonata...It's the most impressive realisation of Schumann's... — BBC Music Magazine, November 2011, 4 out of 5 stars More…

A decade after his highly acclaimed ‘In Concert’ album (4721192), master pianist András Schiff continues his documentation of Robert Schumann’s music in a specially-priced 2-CD set recorded in Germany at Neumarkt’s Reutstadl.

The repertoire includes Papillons op. 2, the Piano Sonata No 1 in F sharp minor op. 11, Kinderszenen (Scenes from Childhood) op. 15, the Fantasy in C major op. 17, Waldszenen (Forest Scenes) op. 82, and the Thema mit Variationen, also known as Geistervariationen. Schiff’s recording presents a revelatory reinvestigation of this enormously influential Romantic music. Schiff, one of the greatest pianists of our era, traces the development of Schumann’s piano music, from the early Papillons, written when Schumann was 19, all the way to the final Geistervariationen, “ghost variations” which the composer believed were dictated to him by angels. The Fantasy in C Major is heard with alternate endings: as well as the official published version, Schiff includes a preliminary one he finds more musically convincing. The pianist gives his thoughts on the matter in a very interesting note in the CD booklet which also gives background information by Wolf-Dieter Seiffert on each of the compositions.

András Schiff, born in Budapest in 1953, puts a strong focus on cyclic performances of the important piano works by the masters from Bach to Bártok. His wide-ranging discography on ECM includes works by Schumann, Schubert, Janáček, Bach, Mozart and many others.

Schiff's complete Beethoven sonata cycle, performed in 15 major musical centres worldwide, was completed in April 2009. He works annually with his own chamber orchestra, the Cappella Andrea Barca, the Philharmonia and the Chamber Orchestra of Europe. Schiff records exclusively for ECM New Series. His many best-selling albums for the label include his acclaimed account of J.S. Bach’s Goldberg Variations (4721852).

if you want the living definition of virtuoso pedalling, listen to Andras Schiff in the 'Aria' movement of Schumann's F sharp minor Sonata...It's the most impressive realisation of Schumann's challenging pedal markings that I have ever heard. Schiff's ability to 'voice' piano writing is perhaps his outstanding feature as a performer...the whole set is full of the pure, Olympian beauty and intellectual sharpness that characterise Schiff at his finest.

Schiff brings a touching intimacy to the suites of short character pieces that make up Papillons, Kinderszenen and Waldszenen, while relishing the grander gestures of the C major Fantasie that makes this absorbing release more so, for Schiff plays Schumann's original ending of the third movement (he tracked it down in the 1970s) which returns to the first Beethoven quote that ends the first movement.

[the Ghost Variations] make a touching ending to a series of wonderfully thoughtful and carefully detailed performances. In Schiff's hands, the F sharp minor Sonata becomes much more introspective than usual. But Schumann lovers will be most intrigued by his account of the great C major Fantasy. Here, rather than the familiar ending, he plays what appears to have been Schumann's original idea.

The Independent on Sunday 2nd October 2011

Schiff's exquisite double-disc recital takes its title from the Ghost Variations of 1854, composed to a theme dictated by angels in the hallucinatory days before Schumann threw himself into the Rhine...Schiff is too subtle a musician to allow a single thesis to dominate. Yet the fine line between dream and delusion can be felt elsewhere, not least the C major Fantasy

Schiff’s lightness of touch in the miniatures which make up Papillons is a delight, and Kinderszenen never sounds clichéd – this is the sweetest, sincerest Träumerai I’ve heard. Schiff also gives us the nine Waldszenen – Vogel als Prophet has a probing, improvisatory feel, and the Jagdlied has bounce and swagger...Astonishing playing, stunningly recorded and very well annotated.